Cocoa in the Country. 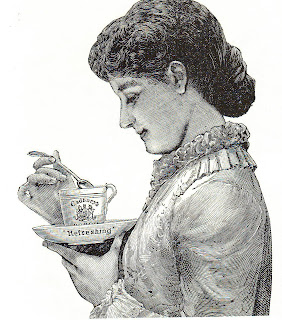 The very first issue of Country Life, that most British of British magazines was launched on this day in 1897. It seems that every country sees its rural life as its real life, its essence, and perhaps it is – even if hardly anyone lives it any more. Country Life is now well-known for its cover pictures of aristocratic homes or aristocratic ‘girls in pearls’, but the first issue (which cost sixpence) had several display advertisements, including one for Cadbury’s Cocoa.

The history of chocolate contains every plot device known to fiction-writers – almost as many as does the history of coffee, and too many for one day. We will save the botanical, linguistic, economic, political, imperial, medicinal, mythological and scientific stories for other times, and today enjoy the religious experience of chocolate (as well as the rural), for a reason which will become clear.

Chocolate originated in Central America, and our words ‘chocolate’ and ‘cacao’ have their origins in the languages of the ancient people of that region, for whom it certainly played spiritual and celebratory role. Eventually, thanks to the Spanish invasion/colonisation of the region, cacao beans made their way to Europe.

The first ‘improvement’ made by the Europeans to the spicy, sometimes bitter beverage was the addition of sugar, and the credit for this idea is occasionally attributed to the Franciscan Bishop of Mexico, Juan de Zumarrogo, himself. The rich, sweet beverage became rapidly popular, and equally rapidly feared by the inevitable small number of ascetics, puritans, purists and kill-joys amongst the clergy. In fact, it spurred a vigorous debate within the Catholic Church, mainly on the issue of whether (as it was so rich and sustaining) it should be considered a beverage or a food, and therefore whether it was acceptable when fasting. A secondary issue was whether of not it incited lust (see the quotation below) - clearly also a topic of great concern to an institution that maintained celibate priests but wanted its flock to go forth and multiply (under the correct set of conditions of course).

Popes between Gregory XIII (1572-85) and Benedict XIV (1740-58) and many lesser clerics made edicts and pronouncements on the sanctity or otherwise of chocolate, but ultimately the Church lost the battle and gave up. The story of Popes and chocolate was still not quite over however, and rumour at the time had it that the death of Clement XIV in 1774 was facilitated by poisoned chocolate given by Jesuits (who have a long involvement in its history), who he had tried to suppress.

The religious connection comes full circle in our story today, as the other very useful thing about chocolate (the drink) is that it is universally liked, but not alcoholic. Developments in the chocolate industry went on apace in England in the nineteenth century thanks to two Quaker (and therefore temperance) families – the Cadburys and the Frys, who need no introduction.

As to the rural aspect to today’s story, it comes in the form of today’s recipe. From The Times in 1942, a wartime recipe for ersatz chocolate (the confection, not the drink) - very welcome during a time of sugar and sweets rationing.

The confection made of Cacao called Chocolate or Chocoletto which may be had in diverse places in London, at reasonable rates, is of wonderful efficacy for the procreation of children : for it not only vehemently incites to Venus, but causes conception in women . . . and besides that it preserves health, for it makes such as take it often to become fat and corpulent, fair and amiable. William Coles, Adam in Eden (1657)
Posted by The Old Foodie at 5:13 AM

Cocoa is very yummy and it's a natural chocolate.