A Whale of a Dinner. 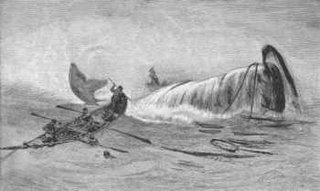 The whaling industry in Australia began on this day in 1791. Samuel Enderby, of the well-established British whaling and sealing firm Samuel Enderby & Sons arranged for whaling ships to carry convicts in the Third Fleet. Naturally they stayed on to ply their lucrative trade, and Australia’s first primary industry was born.

The enterprise was enormously successful - for humans that is. The Southern Right Whale was harvested close to extinction within a mere fifty years. Humpback Whales lasted a little longer before reaching almost the same fate, but it was not until the 1930’s that the world started to get concerned enough to call a moratorium on the industry.

Several species of whale remain endangered to this day. Part of the world continues to hunt them, while the rest of the world continues to argue about how to solve the problem. The great disgrace is that this is not a story of one hungry species eating another to near-extinction.
Humans have almost destroyed the whale to supply their demand for for non-culinary oil for candles, lamps, soap etc, and “bone” for such essential items as whips, corsets, and umbrellas.

Whale-meat is edible of course, but apart from some communities in the frozen wastelands of the world, it has not historically been a “real” food for significant numbers of people. Occasionally it has been serendipitous food, as when a whale has been beached, or as a convenient meal for fishermen in the whaling industry. Sometimes it has been eaten as a ceremonial or symbolic food – such as in Japan where it has been eaten for centuries and is considered part of the cultural heritage.

Ironically, simultaneously with the realisation in the 1930’s that some species of whale might be endangered, humans became endangered by a different sort of conflict. The two concepts collided when human war made humans realise that whale could be a good source of “real” food too. In Japan, the effect was felt after the war, when for a long time the only protein available in any quantity was whale meat, and an entire generation of Japanese schoolchildren of the time have become adults who look upon it as comfort food.

In Allied countries faced with shortages and rationing, food authorities promoted whale as a substitute for other meat, but it would be an understatement to say that it never became popular in those countries in spite of the vigour and creativity of the promotional campaigns. Britain was still under rationing for years after the war, and in 1947 “a correspondent” to The Times gave some ideas for cooking whale meat.

Firstly, she described it:

“The whale meat, which has been likened to beef, is perhaps more of the tecture of strong liver. The lack of fat is a drawback in the opinion of some, but all who eat it are surprised at the absence of a fishy taste and the darkness of the flesh”.

Then she recommended it cooked as “goulash”.

Whale Goulash.
Allow about a ¼ lb. of meat to a person (the cost at the fishmongers is 1s. 10d. a lb.). Cut finely a similar weight of onions and cook them in hot fat until they are transparent , but do not allow them to brown! Cut the whale meat into small cubes, season with salt and sweet paprika, add it to the onions, and cover and cook for half an hour over a low heat to draw out the juices. Add tomato ketchup to colour and a little water. Keep covered and simmer until the onions have become absorbed into the gravy. Serve with macaroni or dumplings.

Dumplings.
To make dumplings, fry a cupful of soft bread cut into small cubes in margarine, put in a basin and sprinkle with a little flour. Add two beaten eggs, or the reconstituted equivalent, enough milk to make a wet dough, and season. Beat well with a wooden spoon and roll into balls with hands dipped in cold water. Put into boiling water and boil for twenty minutes.

He piled upon the whale's white hump the sum of all the general rage and hate felt by his whole race from Adam down; and then, as if his chest had been a mortar, he burst his hot heart's shell upon it. Herman Melville, ‘Moby Dick’.
Posted by The Old Foodie at 5:26 AM

It sure does. What, exactly, does it make YOU think of Scott?
I cant get past the mental picture of a whole whale's worth of meat needing cutting up and managing on the spot - particularly in the days before refrigeration, in the situation when a whale was washed up ashore and the people didn't want to waste the protein.
Even if you could buy whale meat, would you? I couldnt buy or eat a piece of an endangered species for any reason.

However, some of the species have responded very well to protection. The humpback species is doing relatively well globally, the minke whale is relatively abundant, the bryde's whale is plentiful in the north pacific, the eastern gray whale is acknowledged to be fully recovered, and recent reports are that even the Antarctic blue whale is recovering now at around 7% a year on average (although it's heavily depleted status means it's still very vulnerable).

Where whaling is carried out today, it's invariably targeting species which are either abundant already or otherwise growing rapidly.

Iceland recently started hunting the fin whale in it's waters, where it is actually not that far off it's pre-exploitation level of abundance. Iceland's quota represents just a tiny 0.036% of the current estimated abundance, so there is really no plausible threat of extinction or even notable depletion from this.

Scientists say that the real threat of extinction where whales are concerned today is not because of hunting, but because of ship strike and entanglement in fishing gear, to which species such as the Northern Right and Western Pacific Gray whale are most vulnerable. Needless to say, no one is hunting these whales, for the obvious reason.

David - thanks so much for that great summary - the picture is more heartening than I thought, although there is obviously no room for complacency. I hope everyone who reads my post goes on to read your comments.

Another Scott - Robert Falcon Scott - consumed and claimed to enjoy seal soup and seal steak-and-kidney pie during the winter of 1910-11 at their base camp in Antarctica. Prepared by Thomas Clissold, the expedition cook.

Back in the 1970's whale meat was still legal in the USA. It was not common.

At a specialty store "Pier One Imports" I saw a can of whale meat and prevailed on my mother to buy it.

It was not impressive. In texture it was stringy and tough and the taste was not as good as canned beef. Even our dog would not eat it and he would eat anything.