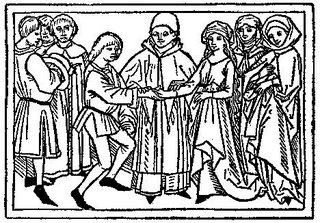 Modern girls can go to online dating services to choose a partner - which is probably as much a lottery as the old-fashioned method of choice-by-parent – but modern girls don’t seem to need or want to ‘forsee-by-ritual’ the man of their ultimate destiny. In older times it was quite the thing to participate in divination rituals, probably for that precise reason - that the girls had no choice of who to marry, so forewarned was forearmed – or hopefully, happily reassured. At the very least they provided an opportunity for a girly sleep-over party.

In olden times, if the previous evening’s rituals had gone well, a girl should have woken up today having dreamt of her future husband, for today is St. Faith’s day. According to legend, St.Faith was martyred in the third century by being baked on a gridiron and then beheaded. The fact that she was beautiful and virginal apparently qualified her to intervene on the part of young women, and her death by baking determined that the method of divination would be by cake. Of course, as in most rituals as well as lotteries, getting the numbers right is essential, so with this understanding we come to the details of the routine.

On St. Faith’s Eve, three girls would make a simple cake of flour, salt, sugar, and water, and bake it on a griddle. Each girl would turn it three times during the cooking. When it was cooked, the cake would be cut into three and each girl’s share cut into three times three pieces. Each of the nine pieces for each girl would be passed three times through the wedding ring of a woman married seven years. Presumably if she was happily married it would all have been more auspicious, but this is not part of the official ritual. Each girl then ate her nine pieces while she recited:

O good St Faith, be kind tonight
And bring to me my heart's delight
Let me my future husband view
And be my vision chaste and true.

The ring would be hung from the bed-head, and the girls would go to sleep, perchance to dream of the man of their dreams. And dreams always come true, don’t they?

If perchance the sleep was dreamless, or the dreamed-one unsuitable, there were other opportunities for divinations of love and marriage, including St. Agnes Eve, St. David’s Day, St. Anne’s Eve, and New Years Eve. It is hardly surprising that so many days were needed; it must have been a very anxiety-provoking time in a girl’s life, for in the absence of many other career options, if she did not become a wife she remained a family liability for ever.

Career options were not totally absent of course. A couple of the alternative jobs that were available for women are the inspiration for today’s recipe choices.

Pets de putain (Farts of a Whore).
Make your Fritters paste stronger than ordinary, by augmentation of flower and egs, then draw them small or slender, and when they are fryed, serve them warm with sugar and sweet water. [The French Cook, by la Varenne, 1653]

Nun’s Cake.
Beat eight ounces of fresh butter to a cream; add half a pound of fine flour, a small nutmeg grated, eight ounces of powdered sugar, the well-beaten yolks of four eggs, and a table-spoonful of cold water. Mix thoroughly, then stir in the whites of two of the eggs whisked to a solid froth. Work all briskly together for some minutes. Pour the mixture into a buttered mould, and, being careful to leave room for it to rise, bake in a moderate oven for about an hour. Probable cost, 1s. 4d. Sufficient for a quart mould. [Cassell’s Dictionary of Cookery, 1870’s]

On gods, mice, and leaves.

Of all smells, bread; of all tastes salt. George Herbert
Posted by The Old Foodie at 5:31 AM