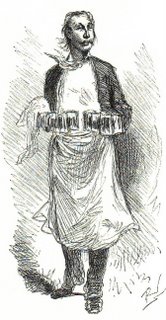 When Crown Prince Ludwig of Bavaria (later Ludwig I, the grandfather of poor mad Ludwig III) married Princess Therese of Saxe-Hildburghausen on this day in 1810, a five day festival was held in Munich as part of the celebrations. It was so much fun (and there was so much potential for commercial success) that it has been held every year since, apart from the 24 times when one or other Apocalyptic horseman has been galloping by.

Events tend to grow when they are both fun and lucrative, and the Oktoberfest now runs for two weeks and attracts over 6 million visitors who drink a lot (especially beer) and eat a lot (especially sausage). To be more specific, in 2004 the consumption factoids are:

The beer is sold in liter glasses, which, I have to say, put the wussy Aussie “schooner” (425 ml) to shame. Some of the beer is specially brewed for the occasion, and can qualify for the name “Oktoberfestbier” if it is made within the Munich city limits.

I have a question: is it the usual thing in Germany to measure sausages in pairs?

Naturally, we have to have genuine German sausages today. We have discussed sausage several times before, and today we discover bratwurst, and re-discover cervella/saveloys – this time called zervelat, in a sixteenth century German cookbook by Sabina Welserin.

How one should make Zervelat.
First take four pounds of pork from the tender area of the leg and two pounds of bacon. Let this be finely chopped and add to it three ounces of salt, one pound of grated cheese, one and one half ounces of pepper and one and one half ounces of ginger. When it is chopped then knead the following into it, one and one half ounces cinnamon, one fourth ounce of cloves, one fourth ounce of nutmeg and one ounce of sugar. The sausage skins must be cleaned and subsequently colored yellow, for which one needs not quite one fourth ounce of saffron. Tie it up on both ends and pour in approximately one quart of fresh water. The entire amount of salt, ginger and pepper should not be added, taste it first and season it accordingly. It should be cooked about as long as to cook eggs. The seasoning and the salt must be put into it according to one's own discretion, it must be tried first. [Sabina Welserin, 1553]

If you would make good bratwurst.
Take four pounds of pork and four pounds of beef and chop it finely. After that mix with it two pounds of bacon and chop it together and pour approximately one quart of water on it. Also add salt and pepper thereto, however you like to eat it, or if you would like to have some good herbs , you could take some sage and some marjoram, then you have good bratwurst. [Sabina Welserin, 1553]

Bologna/Baloney sausages were the topic on December 19th 2005.

Beer is proof that God loves us. Benjamin Franklin.
Posted by The Old Foodie at 5:46 AM

To your question: This being Munich the sausage at hand will be Weisswurst (white sausage, eaten with sweet mustard and brezl). I suppose - but I am not an expert on German sausages - Weisswurst is counted in pairs because it is served in pairs. I at least get that impression from several fotographs I have seen. The Weisswurst is a sausage that is boiled, like the Bockwurst (also served in pairs). Sausages that are baked or grilled (Bratwurst-types like Krakauer and Thüringer) come single.
Let's hope for a German reader who can realy enlighten us on this important topic.
Elisabeth

Hello Elisabeth, thanks for visiting. Every time I write a story it leaves me with more questions! I agree, lets hope a German sausage expert visits.

Not an expert, but being born and living in München I should know a little...
Weißwurst, the white sausage is counted in pairs only by strangers. Munich vendors will look stern if you order them in pairs. Even though it is true: most people eat two at a time. Better order in pieces. Other sausages such as Wiener (Frankfurter) are mostly sold in pairs. As far as my knowledge goes, the roots to this is the way they are made. The tan on the outside comes from the smoking process. You will notice the virgin color of the sausage in the little dent at one end of each sausage. For smoking the sausages are draped over a small beam, in pairs, which laves the impression and hinders the smoke from reaching that spot. When sold these Würstl still come in pairs, even though I have seen Wiener on a string... So much for the exeption that proves the rule.
Another comment is: There was no crazy king Ludwig the III. only the II. the very same one who built Neuschwanstein to be the stage in reality to several Wagner operas. He supposedly drowned in the Starnberger See near Munich in the year 1886.
The Oktoberfest was started as wedding party to his father in 1810. Refer to the official Oktoberfest Page: http://www.oktoberfest.de/de/08/content/geschichte0/
When I go to Oktoberfest the more common food there is Hendl (chicken from the turning spit) and Wiesnbrezn (giant soft Pretzls). As only Breweries using munich water are allowed to errect their Bierzelte (beer-tents) on the Theresienwiese, the majority of beer is the special Wiesnbier.
Lukas

Lukas - thankyou so much for your comments and insights.Isn't the Internet a wonderful thing! Janet