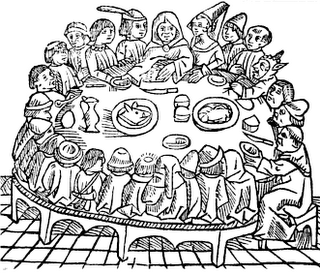 Geoffrey Chaucer died on this day in the year 1400, with his Canterbury Tales still unfinished. The Tales consist of a collection of stories in prose and verse told to while away the time, by a group of pilgrims on their way to Canterbury. One of the pilgrims is a Cook:

A Cook they hadde with hem for the nones,
To boil the chiknes with the marybones,
And powdre-marchant tart and galingale.
Wel coude he knowe a draughte of London ale.
He coulde roste, and seethe, and broile, and frye,
Maken mortreux, and wel bake a pie.
But greet harm was it, as it thoughte me,
That on his shine a mormal hadde he.
For blankmanger, that made he with the best.

In other words, the Cook is skilled at roasting, boiling and frying, he can make pies and stews and many other dishes, he knows how to use spices, and can determine the quality of ale. Unfortunately he also has a running sore on his shin (possibly leprous or syphilitic), which disgusts the narrator, as does his habit (mentioned later in the story) of repeatedly re-heating his pies – after he has drained off the gravy so that he can re-use it – and his shop is full of flies, which may make up some of the “parsley” in his stuffed goose. The reader is equally disgusted, and is grateful for modern times and modern food laws.

Rather than focus on bakers who ooze pus, and thereby risk losing our appetites for dinner, let us look at food words instead.

“Marybones” are marrow-bones, for many centuries prized for their rich, unctuous, fatty, contents that were added to sweet and savoury dishes alike – although as we have discussed before, there was no such distinction in medieval times.

“Poudre Marchant” appears to have been some sort of prepared spice mix, which seemed to be “tart”, although it seems that no-one recorded its exact composition. “Galingale” is interesting. Does it mean what we now call “Galingal”, or Alpinia galanga, the slightly gingery root familiar to us in South East Asian cuisine, or the European sedge Cyperus longus, which also has an aromatic root? The latter, most likely?

“Blankmanger” means “white food”, and originally was a sort of custard or thick pottage made with almond milk and chicken – nothing at all like its modern bastard offspring – the sweet, insipid children’s party food we call “blancmange”.

“Mortreux” (or Mortrews) meant a sort of meat stew which was ground up in a mortar (hence the name) and was sometimes (as in the recipe following) meant to be so thick “that it be standing” – in other words, similar to a meat paste or paté. The recipe uses two other spice mixes, powdour fort (strong) and powdour douce (sweet) – and again we must guess at the actual blend.

The cookbook of the Master Cooks of King Richard II, and called “The Form of Cury”, was published in the last decade of Chaucer’s life.

Mortrews.
Take hennes and pork and seethe hem togyder. Take the lyre of hennes and of the pork and hewe it small, and grinde it al to doust; take brede ygrated and do thereto, and temper it with the self broth, and alye it with yolkes of ayren; and cast theron powdour fort. Boile it and do therin powdour of gynger, sugur, safroun and salt, and loke that it be stondying; and flour it with powdour gynger.

Take chicken and pork and simmer them together. Take the liver of the chicken and pork, and chop it fine, and grind it until smooth. Take grated bread and add it, and blend it with some of the broth and thicken it with egg yolks, and sprinkle on some “powder forte”. Boil it and add “sweet powder” of ginger, sugar, saffron, and salt, and make it stiff, and dust it with powdered ginger.

In the name of Coleslaw.

Galingale is the SE Asian root. (I'm feeling informative today.) And there is no single recipe for poudre fort or poudre douce or any of the mixed spice thingies because it was like a curry powder, ie proportions and ingredients changed according to the person who made it up. There have been several attempts to reconstruct these powders and I've played with some of the results and most of them are convincing and create good food.

Hello Gillian. Thanks so much for the feedback - I did want it to be the "real" galingal! I am thinking of asking a formal "Question a Day" on the blog. Every post raises more questions for me - and I dont always put them in the post (sometimes they are peripheral). People might be more inclined to comment if I ask a formal question. What do you think? I could learn a lot that way.

Would you care to share some of your interpretations of the spice powders with us via your own food blog?

Foodie,
I have a brass-rubbing of Chaucer's coat of arms from his son's grave hanging on my wall. Sadly, no one knows who Chaucer was anymore.

Hello Kevin. I dont think Chaucer is completely forgotten yet! I plan on trying to fit in a couple more food posts on him.

According to 'the glutton's glossary' by John Ayto the word Galingale originally referred to the SE Asian root and came to be more commonly applied to Cyperus longus later in the sixteenth century so I think in this case it probably is the SE Asian root. Gerard in his herbal definately knew of what we call galangal which was "brought to us from Iava (Java) in the East Indies".

Thanks Lukas.
I knew I should have checked Gerard. But then I wouldn't have gotten all this lovely feedback, would I?
Janet

The poudre fort I use, though I'm not sure whose it is (I suspect French, since I've mostly focused on Le Menagier and Taillevent) is equal parts ginger, fine-ground black pepper, powdered bay leaves, and powdered mace.

Hello Alexandra - what have you cooked with your poudre fort?

I cook with my Powder Forte.

The soft backround of the sweeter aromatic spices make this blend table-shaker worthy.

I use this blend in pates replacing Quatre' Espice. It's absolutley delicious spinkled over any meat before (and after) roasting. Adds an exotic touch to salads. I use it in place of regular pepper in many pickles and sauces such as BBQ, sweet chili salsas and warm fruit sauces. It is particularly good with fruits.

Be brave- try it!

Hello Barb. Thanks for giving your recipe, it sounds great and I will definitely try it.Janet

I just discovered this post and I'm loving it! Thank you so much for all the info.
I'm studying English Literature, and I'm sitting right now with my buddy Chaucer, having a cup of tea, discussing what is "galingale".
I definitely think it's the Thai Ginger…it is well known that since times memoriam there was a strong "spice trade" all over Europe from Far East and the Middle East.
:):):)