"A Solace of Ripe Plums" 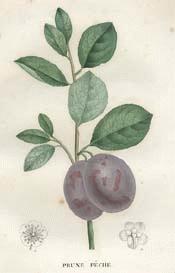 Our old friend Parson James Woodforde sat down to “a Loin of Veal rosted, some hashed Hare and a Damson Pye” for dinner on this day in 1789. Not a mere plum pye, mind you, but a damson pye. The distinction was important.

The exact origin of the plum is shrouded in some guesswork, but this not being a history of horticulture blog, it will have to suffice to say that the origin is ancient and Asian. There are many Prunus species - wild, semi-wild, and cultivated, which give us a veritable feast for all culinary reasons, from jam to gin. “Damsons” were originally “Damascus plums”, because it was believed that they originated in that most ancient of cities. The many different spellings of the word over the centuries (damasons, damysyns, damasins etc), may indicate that sometimes a different variety was being specified, if a legal case before the courts in Nottinghamshire in 1891 is any clue. A greengrocer complained that he had ordered damsons but got damascenes - suggesting that damsons were superior.

There is then, a hierarchy of plums that runs from the sublime to laxative (for what is a prune but a dried plum?). Where is the damson on this scale? Below the regal “Reine Claude” (or Green Gage) named after the Queen consort of François I of France, surely? Well above the wild sloes and bullaces available to the foraging peasants, certainly.

Plums are not just good to eat, they have a long history of medicinal use too, and sometimes damsons were specified in old remedies. The fifteenth century physician and monk, Andrew Boorde, said “damysens eaten before dyner, be good to prouoke a mans appetyde”, which is an entirely different sort of gastrointestinal provocation than we normally associate with plums (the dried ones anyway). The absence of a medical qualification was not always a barrier to writing medical texts, and the scientist Robert Boyle (of “Boyle’s Law” fame) wrote a little book called “Medicinal experiments: or, a collection of choice and safe remedies … ” in 1718, which gives this tasty remedy for an annoying problem:

For the Hiccup (even in Fevers.)
Give two or three preserv’d Damsons at a time.

Plums of all types are ideal for jams, jellies, and conserves. Hannah Woolley in her “The queen-like closet; or, Rich cabinet stored with all manner of rare receipts for preserving, candying & cookery. Very pleasant and beneficial to all ingenious persons of the female sex.” (1670) gives a recipe for “marmalade” made with damsons. It sounds quite delicious, with the inclusion of apples and some ginger.

Marmalade of Damsons.
Take two Pounds of Damsons, and one Pound of Pippins pared and cut in pieces, bake them in an Oven with a little Ginger, when they are tender, poure them into a Cullender, and let the syrup drop from them, then strain them, and take as much sugar as the Pulp doth weigh, boil it to a Candy height with a little water, then put in your Pulp, and boil till it will come from the bottom of the Skillet, and so put it up.

William Carlos Williams.
Posted by The Old Foodie at 5:32 AM