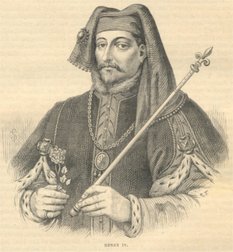 Henry IV was crowned at Westminster on this day in 1399, and what a feast was had! The service of food was quite different in the 14th century. There were three courses at elaborate affairs, with a huge number of dishes in each course, but without any clear distinction between savoury and sweet. The general trend was from the bigger dishes in the first course to the smaller more delicate in the third. Different tables would have received different selections, depending on rank.

What to choose from such a feast? Some of the ingredients would be impossible to come by today – there is not too much bittern and crane at the butchers nowadays. Some dishes – the sweetened meat dishes for example – would probably not suit most modern palates. There are a few however that sound delicious, and could easily appear at a modern dinner party.

Chike Endored (Gilded chicken).
Take a chike, and drawe him, and roste him, And lete the fete be on, and take awey the hede; then make batur of yolkes of eyron and floure, and caste there-to pouder of ginger, and peper, saffron and salt, and pouder hit faire til hit be rosted ynogh.

Take a chicken, remove the viscera and roast him. Leave the feet on, and take away the head. Make a batter of egg yolks and flour and add powder of ginger, pepper, saffron and salt, and powder it fair till it be roasted enough.

Big Fish of the Sea.

Quotation for the Day ….

A crust eaten in peace is better than a banquet partaken in anxiety. Aesop’s Fables.
Posted by The Old Foodie at 6:14 AM

Very intersting and I wonder how and where you put all of this food? I do beleve these were large productions lasting hours upon hours! Thanks for the interesting post!

I just wanted to say that I truly enjoy visiting your blog every day. What a beautiful idea, and what dedication you bring to your posts! Keep up the great work.

Hello twv and nene; thanks for visiting. I dont think I'll ever run out of stories!

Could Egle be Eagle and the one below it be lily pads?

thanks for posting this! I live in Segur le Chateau in France. It's the village that Henri IV's mother was born in, and in fact our rue it Avenue Jeanne d'Albret. It's fabulous to learn what Henri IV and his relatives would have eaten.

Hello Melanie! what a wonderful place to live! I am delighted that you enjoyed the story and it made history come alive for you a little bit more than it probably is every day you walk down the street.