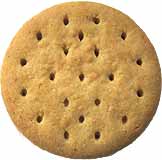 This day in 1764 was the birthday of the Scottish Dr John Abernethy, surgeon at St Bart’s in London, who either invented himself or had named for him the “Abernethy biscuit”. Dr John was apparently an indifferent surgeon but an excellent lecturer, and a dogmatic and curmudgeonly man who believed that most diseases were due to disordered digestion. It is said that an “indolent and luxurious” patient asked him what was a cure for gout, and the good doctor replied (tersely) “Live upon sixpence a day – and earn it”.

The Abernethy biscuit was an adaptation of the plain Captain’s biscuit, with sugar (presumably to make them more palatable), and caraway seeds, presumably because of their reputation for being beneficial in digestive disorders.

‘Medical biscuits’ today include complete nutrition packages designed for areas of natural disaster, over-the-counter charcoal biscuits which “adsorb gaseous impurities in the digestive system” (which may be a very good thing for some people!) and ‘Health Bars’, which are more often than not very unhealthy high sugar snacks.

To make the genuine article: from ‘The Bread And Biscuit Baker's And Sugar-Boiler's Assistant’ (1890)

Abernethy Biscuits. (Dr. Abernethy's Original Recipe.)
1 quart of milk, 6 eggs, 8 ozs. of sugar, 1/2 oz. of caraway seeds, with flour sufficient to make the whole of the required consistency. They are generally weighed off at 2 ozs. each, moulded up, pinned and docked, and baked in a moderate oven.

Or for a more modest quantity: from ‘Cassell’s Dictionary of Cookery’ (1870):

Rub one ounce of butter into one pound of the best flour, adding a dessert-spoonful of sugar and half an ounce of caraway seeds. Mix all together with two eggs, and , if necessary, a little milk. Roll the batter out, knead it into small round cakes, making holes with a fork to allow the steam to escape, and bake in a moderate oven. Time to bake, fifteen minutes. Probable cost, 6d., Sufficient for eight biscuits.

The picture of the Abernethy biscuit is courtesy of NICE CUP OF TEA AND A SIT DOWN - the website with the best-ever Mission Statement:
Well I think we should all sit down and have a nice cup of tea, and some biscuits, nice ones mind you. Oh and some cake would be nice as well. Lovely.
Posted by The Old Foodie at 4:29 AM