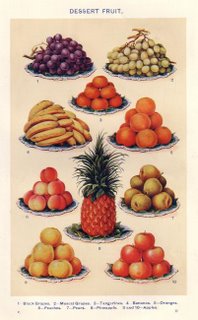 The Lord Mayor and Lady Mayoress of London gave the “accustomed Easter entertainment to a numerous and distinguished party at the Mansion House” on this day in 1848. Messrs. Ring and Brymer, caterers, provided the following Bill of Fare:

Preserved ginger was a standard treat on the dessert table at Lord Mayor’s dinners. Here is a recipe from the 1845 edition of William Kitchiner’s “Cook’s Oracle”.

To Preserve Ginger.
Take green Ginger, pare it neatly with a sharp knife, throw it into a pan of cold water as it is pared, to keep it white; when you have sufficient, boil it till tender, changing the water three times; each time put it into cold water to take out the heat or spirit of the Ginger; when tender, throw it into cold water; for seven pounds of ginger, clarify eight pounds of Refined Sugar; when cold, drain the Ginger, and put it in an earthen pan, with enough of the Sugar, cold, to cover it, and let it stand two days, then pour the Syrup from the Ginger to the remainder of the Sugar; boil it some time, and when cold, pour it on the Ginger again and set it by three days at least. Then take the Syrup from the Ginger, boil it, and put it hot over the Ginger; proceed in this way till you find the Sugar has entered the Ginger, boiling the Syrup and skimming off the scum that rises each time, until the Syrup becames rich as well as the Ginger.

Obs. If you put the Syrup on hot at first, or if too rich ,the Ginger will shrink, and not take the Sugar.

A banquet is probably the most fatiguing thing in the world except ditchdigging. It is the insanest of all recreations. The inventor of it overlooked no detail that could furnish weariness, distress, harassment, and acute and long-sustained misery of mind and body. Mark Twain in Eruption
Posted by The Old Foodie at 5:40 AM

Didn't these people eat any vegetables?! Looks mostly to be meat and fruit.

Hello Sally
It certainly seems that veges were not featured, particularly at these big banquets, although they would have been included as ingredients in some of the "made dishes".
Sounds awful, doesn't it?