Dinner in the Digester. 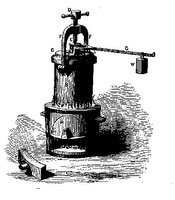 On this day in 1682, a dinner was held at the Royal Society in London, and on this occasion the food was cooked in a new invention of the French physicist Denis Papin – a ‘steam digester’. Many of the intelligentsia of the day were present, including the diarist and horticulturalist John Evelyn, who recorded in his diary:

I went this afternoone with severall of the Royal Society to a supper which was all dress’d, both fish and flesh, in Monsieur Papin’s Digestors, by which the hardest bones of beefe itself, and mutton, were made as soft as cheese without water or other liquor, and with lesse than 8 ounces of coales, producing an incredible quantity of gravy; and for close of a jelley made of bones of beefe, the best for clearness and good relish, and the most delicious that I have ever seen or tasted. We eat pike and other fish bones, and all without impediment; but nothing exceeded the pigeons, which tasted just as if bak’d in a pie, all these being stewed in their own juice without any addition of water save what swam about in the Digester, as in bal neo; …. I sent a glass of jelley to my wife, to the reproach of all that the ladies ever made of the best hartshorn.

There are many recipes in 1682 edition of Wm. Rabisha’s ‘The Whole Body of Cookery Dissected’ which would have been appropriate to cook in the digester (or its modern child - your pressure cooker). Jelly-making was a very complicated and tricky business in the days before instant gelatine, and Rabisha does give a recipe for hartshorn jelly, but even with a modern pressure cooker it would be a rare and enthusiastic historic cook who would actually make it.

This recipe would be adaptable today:

To boyl a Leg of Veal and Beacon [sic].
Lard your leg of Veal with Bacon all over, and a little Lemmon-pill amongst it, then boyl it with a piece of middle Bacon; when your Bacon is boyled, cut it in slices, season it with Pepper and dryed Sage mixt together; dish up your Veal with the Bacon round about it; send up with it, saucers of Green-sauce, strow over it Parslee and Barberries.

Rabisha’s boiled pigeon, hartshorn jelly, and green-sauce would have been fitting, but would have overflowed the 400 words, so they are here, if you want them.

Tomorrow: Dog for Dinner.
Posted by The Old Foodie at 5:53 AM