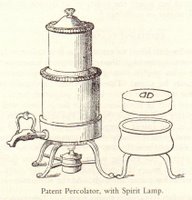 Frances Woolfolk Wallace kept a diary of her journey from their home in Kentucky to “Dixie Land” to visit her Confederate officer husband during the American Civil War. On this day in 1864 she wrote:

Left Dr. Boyd's for Meridian … How kind the doctor and his wife have been to us. We fared very well and missed nothing but coffee, they use cornmeal parched for coffee, and except for that they live very well. We will now, I fear, find rough fare.

Desperate times produce desperate solutions, and the variety of coffee substitutes suggested during the war was testament to human ingenuity and the creative impetus of caffeine withdrawal. There were vigorous debates in the correspondence columns of the papers about the virtues of parched cornmeal, rye, acorns, and wheat, or the seeds of okra, persimmon, garden peas, and cotton, or the roots of sweet potato, beets, dandelion and chicory, and even the grated crust of dry bread as substitutes or extenders for the real thing.

Sweet potato seemed to be a popular choice, no doubt for the simple reason of its availability. One correspondent to an Alabama newspaper wrote:

We have just the thing in the sweet potato. When properly prepared, I defy any one to detect the difference between it and a cup of pure Rio. Preparation--Peel your potatoes and slice them rather thin; dry them in the air or on a stove; then cut into pieces small enough to go into the coffee mill, then grind it. Two tablespoons full of ground coffee and three or four of ground potatoes will make eight or nine cups of coffee, clear, pure and well tasted.

Eliza Acton, whose recipes we are featuring during her birthday week, had been dead several years when Frances wrote her diary, but her book (1845) was as popular as ever. She gave an extravagant recipe for coffee which would have been beyond the wildest dreams of the Confederate soldiers – in spite of its very appropriate name.

BURNT COFFEE, OR COFFEE A LA MILITAIRE.
In France vulgarly called Gloria.
Make some coffee as strong and clear as possible, sweeten it in the cup with white sugar almost to a syrup, then pour the brandy on the top gently over a spoon, set fire to it with a lighted paper, an when the spirit is in part consumed, blow out the flame, and drink the gloria quite hot.
Tomorrow: A Tale of Timbuktu.

Joe Pastry has some posts on Civil War food, so if you are keen to know more, go on over. He also has some great recent posts on working with chocolate, so if you dont know about tempering etc, go and find out!

Give a frontiersman coffee and tobacco, and he will endure any privation, suffer any hardship, but let him be without these two necessaries of the woods, and he becomes irresolute and murmuring.
U.S. Army Lt. William Whiting in 1849
Posted by The Old Foodie at 5:54 AM

O.F. - I cannot help but be touched that you referenced the green and rolling hills of Kentucky in today's post. They are looking beautiful indeed this week, covered as they are with spring blooms of dogwood and redbud...signs that the Derby is nearly upon us. Should you wish to place bets please forward horse names and dollar amounts.

My Dear JOe
I intended to link to those of your pages that have some Civil War food history, but it appears that in the morning rush to my real job, I did not do so. I will attend to it belatedly this evening.
TOF

Now THAT'S a cuppa I would partake of! LOL Nice post O.F.

Very nice! I found a place where you can
make some nice extra cash secret shopping. Just go to the site below
and put in your zip to see what's available in your area.
I made over $900 last month having fun!
make extra money

I've never tried most of those expedients, but it's easy to find coffee with chicory in New Orleans. Many people here prefer it to the straight, even though it's no longer much cheaper.