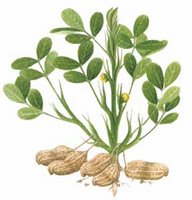 In 1854 Dr David Livingstone, medical doctor and missionary, was on his great trans-African journey. He was ill with a fever when he reached the banks of the River Quango on 4th April, but was prevented from continuing by “petty tyrants” who controlled the crossing. A local militia man called Cypriano came to his aid, and they crossed into Portuguese territory later that day. The next morning Livingstone woke to a better breakfast than he had had for some time.

On the morning of the 5th Cypriano generously supplied my men with pumpkins and maize, and then invited me to breakfast, which consisted of ground-nuts and roasted maize, then boiled manioc roots and ground-nuts, with guavas and honey as a dessert. I felt sincerely grateful for this magnificent breakfast.

So there he was, Scot in Africa, the guest of a Portuguese man who fed him food originating from half a world away – assuming the ‘groundnut’ was the peanut. It could have been the Bambara or Hausa groundnuts which are African, but pumpkins, manioc (cassava), guavas and maize (which probably also made the ‘farina’) are from the Americas. Presumably the honey was local.

What was not on the menu was anything that we would now associate with Portugal, so it seems fair to give you a ‘Portuguese’ recipe, albeit one from an English cookbook. The Queen in Digby's time was Catherine of Braganza, the Portuguese wife of Charles II.

From: ‘The Closet of the Eminently Learned Sir Kenelme Digbie Kt’ (1669)

Portugal Broth, as it was made for the Queen.
Make very good broth with some lean of Veal, Beef, and Mutton, and with a brawny Hen or young Cock. After it is scummed, put in an Onion quartered, (and, if you like it, a Clove of Garlick,) a little Parsley, a little balm; some Coriander-seeds bruised, and a very little Saffron; a little Salt, Pepper and a Clove. When all the substance is boiled out of the meat, and the broth very good, you may drink it so, or, pour a little of it upon tosted sliced-bread, and stew it, till the bread have drunk up all that broth, then add a little more, and stew; so adding by little and little, that the bread may imbibe it and swell; whereas if you drown it at once, the bread will not swell, and grow like gelly; and thus you will have a good pottage.