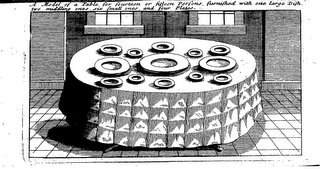 The Marquess d’Arci (“formerly the French King’s Ambassador at Turin”) invited the Duke of Chartres to an “entertainment” on this day in 1690. The cook was Francois Massialot - according to his own description “a cook who dares to qualify himself royal”. His very successful cookbook “The court and country cook … ”, first published in 1691 was translated into English and ran to many editions over the next few decades.

Potages.
Two sorts of Potages, viz, A Bisk of Pigeons, and a Potage de Santé, with a young fat Hen.

The side-dishes.
A Quarter of Mutton farced.
A large fat Pullet in a Ragoo.
A Breast of Veal farced.
Pigeons with sweet Basil in their Bodies, together with small Farce; and a large Piece of Beef in the middle.

For the Roast.
A great dish of Roast-meat, consisting of several Fowls, according to their Season, and two Sallets.

The Intermesses.
A Dish of Pain au Jambon.
Boil’d Cream
A Ragoo of Sweet-Breads of Veal and Capons-livers.
A Dish of Asparagus with Sauce of Jus lié, or thick Gravy.
And so there may be seven Dishes for each Course.

According to the conventions of the time, all of the dishes in each course would have been placed on the table simultaneously and with absolute symmetry. The meal would have finished with a ‘banquet’, which originally meant an array of sweetmeats, fruit and nuts, often served in another room or even a garden ‘banqueting house’.

As for the menu itself – how good does the pigeon dish sound? Here is Massialot’s recipe.

To dress Pigeons, with Sweet Basil.
Let your Pigeons be well scalded, and slit a little on the Back, to let in a small Farce, made of raw Bacon well minc’d, with Parsly, sweet Basil and Chibbol, all well season’d. The having stewed them in a Pot, with some Broth, an Onion stuck with Cloves, a little Verjuice and Salt, let them be roll’d in beaten Eggs, and at the same time wrapt up in Bread-crum, to the end that they be well breaded. Every one of the Pigeons being thus order’d a-part, they must be fried in hot Lard, till they come to a fine colour, and afterwards fried again all at once with Parsly; which is to garnish them when they are ready to be serv’d up among the Side-dishes.

Tomorrow: Worts of all sorts.
Posted by The Old Foodie at 5:49 AM