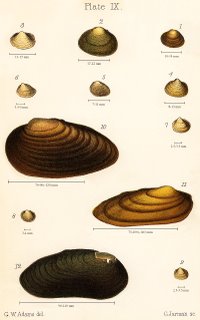 In 1893 the famous Parisian restaurant ‘Maxim’s’ opened on this day. Or it might have been the 23rd. The confusion was discovered too late to change yesterday’s “Tomorrow is …” line, but luckily this day is also the anniversary in 1972 of the gangland killing of Mafia boss “Crazy Joe” Gallo at Umberto’s Clam House in Manhattan. Luckily for the Old Foodie that is, not for Crazy Joe, terminated in the middle of his 43rd birthday dinner of spaghetti with clams, because the bivalve theme is still OK.

One of Maxim’s specialties is “Billi Bi” soup – a cream soup of mussels with white wine, named for the tin magnate William B Leeds (affectionately know as – Billi B to his friends). The dish was not invented for him – mussel soup is popular in many regions of France, in particular in Brittany where it is often made with saffron. The name change is an example of currying favour with a wealthy patron by re-naming his favourite dish in his honour.

The French are masters of the art of making soup from the produce of the sea, and they should be, because they have been practicing for centuries. One of the earliest French cookbooks, “The Viander de Taillevent”, dates from the last few decades of the fourteenth century, although the recipes are much older. Taillevent rose from being a kitchen boy to the master cook of Charles V, and his manuscript has many recipes for fish and seafood. Here is a small sample.

Oyster ragout.
Scald them, wash them well, and fry them in oil. Take browned bread, puree of peas or some of the water in which the oysters were scalded (or other hot boiled water), and wine (mostly), and sieve. Take cassia, ginger, cloves, grains of paradise and saffron (for colouring), steeped in vinegar. Add onions fried in oil, and boil together. It should be very thick. Some do not boil the oysters.

Mussels.
Cook them in water with some vinegar and (if you wish) some mint. When setting them out, add some Spice Powder. Some wish butter with them. Eat them with vinegar, Green Verjuice Sauce, or Green Garlic Sauce. You can make some ragout from them if you wish.

In case it is Maxim’s anniversary, you could finish with a Tarte Tatin – sort of upside down caramelised apple tart - the restaurant’s dessert specialty.

Now I have something to work on for dinner. I just have to find them in the kitchen cabinets. Thanks for the heads up!