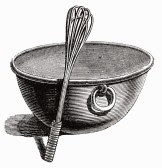 On this St Valentine’s day, for your reading (if not eating) pleasure, I give you a 16th century take on aphrodisiac food. You may have a little trouble getting one of the ingredients for this recipe, but I am sure we can leave it out without losing too much of the effect.
A Tarte to provoke courage in a man or Woman.
Take a quart of good wine, and boyle therein two Burre rootes scraped cleane, two good Quinces, and a Potato roote well pared, and an ounce of Dates, and when all these are boyled verie tender, let them be drawne through a strainer wine and all, and then put in the yolks of eight Egs, and the braines of three or four cocke Sparrowes, and straine them into the other, and a little Rosewater, and seeth them all with Sugar, Sinamen and Ginger, and cloves and Mace, and put in a little Sweet Butter, and set it upon a chafing dish of coales betweene two platters and so let it boyle till it be something big.
[From : “A good huswifes handmaide for the kitchin Containing manie principall pointes of cookerie …”; 1594]

There is so much of interest here, I hardly know where to start. The beginning usually being a good place, I will start with the background: the mediaeval theory-of-everything. It was believed at that time that everything single thing in the natural world arose from the four basic elements (fire, earth, water, air), each of which had a particular quality (hot, dry, moist, cold). In the human body these were represented by the ‘humours’ (sanguine, choleric, phlegmatic, melancholic). Disease was due to imbalance in these humours, and health and mood could be adjusted by varying the diet, so long as you knew the ‘temperament’ of each food. So - any physician (or decent cook) would have understood the potential effect of any dish by considering the ingredient list.

Before we get to the ingredients for this recipe, let us consider the title. Why ‘courage’? Because back in the 16th century, the word also used to mean lust. So this spicy, custardy, vaguely pumpkin-pie style dish would have been expected to provoke the passion to venery, that’s why. Do you see where we are going now?

Let us take the ingredients one-by-one.

Burre (burdock) roots were a common medicinal and culinary herb with a sweet taste and mucilaginous texture – both useful features in a sweet tart. The idea that astrological influences affected the nature of a food was also taken for granted at that time, and as the burdock plant came under the influence of Venus its use to provoke ‘courage’ would have been obvious. As an added bonus, burdock also “doth wonderfully help the biting of any serpents” so it might be a handy ingredient if you are planning a romantic picnic in the country on the day.

The quince is thought by some scholars to have been the fruit that tempted Eve in the Garden of Eden, which would make sense as it probably originated in Persia. It has a wonderfully voluptuous shape and feel, and its fragrance is said to be sufficient to make a woman faint with delight into the arms of her lover. As an intriguing aside, which may or may not be relevant, marmalade was originally made from quinces – and in Elizabethan times prostitutes were called ‘marmalade madams’.

The ‘potato’ in this recipe was the sweet potato – this recipe was written a couple of centuries before the ordinary potato became a common food. Its place in this recipe can be explained by the 16th century Dr Thomas Muffet in his book “Health’s Improvement”. He says of sweet potatoes that they "nourish mightily...engendering much flesh, blood, and seed, but withal encreasing wind and lust." In other word, a perfect ingredient for an aphrodisiac dish, although one would have to worry a little about the associated ‘wind’.

Dates had also been considered an aphrodisiac and fertility symbol in the Middle East for many centuries, so their inclusion in this tart made sense even apart from the sweetness and texture that they would have added to the mixture.

Sugar was very expensive in the sixteenth century, as were the spices, so this tart was clearly only for the well-off. Human nature being what it is, obvious extravagance may have gone some of the way towards helping the aphrodisiac effect, as it perhaps does now.

Now we come to the sparrows’ brains, which are not terribly easy to source these days, and may need to be omitted in any modern rendition of the recipe. They were included on account of their astrological significance. Sparrows had been associated with the planet Venus since very ancient times, and their brains were popular ingredients in remedies to improve the generative powers.

I leave it to you, my clever readers, to ponder on the reason that the brains of male sparrows are specified in a dish intended to provoke lust, and to interpret the final mysterious instruction to ‘boyle till it be something big’.

Steak and Mustard in America.

Clearly it is not the lovelorn sufferer who seeks solace in chocolate, but rather the chocolate-deprived individual, who, desperate, seeks in mere love a pale approximation of bittersweet euphoria. Sandra Boynton.
Posted by The Old Foodie at 6:06 AM

Fascinating information. You have a very interesting blog, which I discovered quite by accident in a search. I have a great love of food history, and will look forward to returning. As for the sparrows, we have a great deal of snow right now, so finding that ingredient will be unlikely!

Love the recipe and the explanation! If we use the doctrine of signatures, celery might make a good substitute for sparrows' brains. :-)

Do you suppose that people actually *ate* sparrow's brains?! This sounds like something out of a witch's spell book doesn't it? Happy Valentine's Day, Janet!

The recipe I am going to share with you today is about 350 years old! A great favourite from the Cape where the first brandy from Cape grapes were distilled in 1672! We have come a very long way since then when it comes to the quality of our brandy, but still, Cape Brandy Pudding remains an old time favourite :) Growing up in South Africa is great fun with all the recipes your mother makes and teaches you during your younger years!