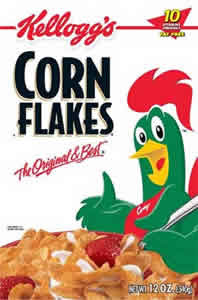 John Harvey Kellogg, the inventor (along with his brother Will) of flaked breakfast cereal, was born on this day in 1852. He was a man of unshakeable beliefs: meat was bad, alcohol was bad, sex was bad (he spent his honeymoon writing a treatise on Hygiene); water was good (lots by mouth, more by enema), yoghurt was good (half the daily allowance by mouth, the other half to follow the path of the water enema), and nuts were so good they would “save the race” (the white race that is).

It has to be said, however misguided his ideas seem to most of us today he worked tirelessly to try to avert what he saw as the path to hell and poor health that humans had taken. He started the Race Betterment Foundation and ran conferences to promote segregation. He started the Battle Creek Sanitorium. He invented cornflakes.

There are two versions attributed to John Kellogg of how the flaked cereal invention came to be: in one he says it was in response to an incident when an elderly female patient broke her false teeth on the zwieback she had been prescribed, the other that it came about when he lived in a small room with no suitable facilities for preparing the cooked grain that was the usual breakfast for those not having the usual meat and eggs of the day. Whatever the explanation, and in spite of the irreconcilable differences it created between John and Will, the invention has made their name famous.

The cornflakes were never intended to replace boiled cereals. Cereals in one form or another were essential in treating what Kellogg saw as the two major ‘problems’ that explained almost all human misery, personal or global. They were ‘the solitary vice’ (which is way outside the scope of this blog) and constipation. In 1919 in his book called the Autointoxication of Intestinal Toxemia, he explained it all:

…. intestinal stasis is the fundamental and widespread cause of a large share of the chronic maladies that afflict the people in civilised lands …

… including, it seems, insanity. He quoted a specialist in mental diseases:

“Who has not seen a prodigious evacuation of the bowels at the hands of the physician terminate a case of insanity…? … constipation is only a link in the series of causes and consequences arising from the disturbed abdominal viscera, and on the mental side encourages and accentuates such symptoms as apathy, irritability, perverted moral feelings, melancholia, mania – nay, suicide ….”

If there was any doubt about the efficiency or otherwise of the bowels, this could be investigated by ‘The Intestinal Test Diet’ in conjunction with the administration of carmine capsules, followed by ‘a careful study of the stools’.

To assist anyone wishing to prescribe or follow this regime who might need some tuition on the subject, he gave 8 ½ pages on the examination of the stool (which presumably included counting the capsules, although I confess I couldn’t read that far).

The book included a recipe for an anti-toxic food:

A Simple and Excellent Breakfast Food.
An excellent breakfast food for the antitoxic ration, which is much to be preferred as an anti-toxic food to the breakfast foods in common use is the following:
Mix together equal parts by measure of corn meal, steel-cut oats, and sterilized bran. Stir this mixture into boiling water in sufficient amount to make a rather thin porridge. As soon as the mixture thickens, or not more than five minutes after beginning to stir the meal, the porridge should be removed from the stove and is ready to serve at once. The preparation is not only far more wholesome than the long cooked cereals, but is more palatable than oatmeal and other preparations served in the usual way.

John Kellogg and his wife Ella featured in another story which included a sample of the ‘Large Number of Original, Palatable, and Wholesome Recipes’ from her book ‘Science in the Kitchen …’

"Some breakfast food manufacturer hit upon the simple notion of emptying out the leavings of carthorse nose bags, adding a few other things like unconsumed portions of chicken layer's mash, and the sweepings of racing stables, packing the mixture in little bags and selling them in health food shops." Frank Muir, British writer and broadcaster
Posted by The Old Foodie at 5:34 AM