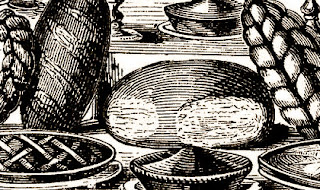 Eleanor Roosevelt was for fifteen years (1946-1961) voted the world’s most popular woman. Her regular newspaper column “My Day” was published six days a week from 1935-1962 with the exception of four days after the death of her husband. Eleanor covered a huge range of topics in her columns from political to personal and global to local. On this day in 1946 she wrote of the post-war proposed voluntary ‘rationing’ of wheat.

“I am glad that the United States is going to help Europe by reducing its own food supply, and that conservation measures are being planned to increase the surplus wheat we can ship abroad. My mind reverts to the last war, when every housewife was asked to use cornmeal instead of flour for at least one meal every day. …. I still have many recipes for different types of cornbread which we used not only once a day, but often twice.

The suggestion has been made to me that, if we had smaller loaves of bread we might waste less, for a large loaf often becomes stale before we have used all of it. Because it is no longer good for table use and because the sugar shortage now makes it difficult to use stale bread for puddings or desserts, we throw it away. I’m sure that, if we were given a really true picture of the situation in many nations – such as Italy, which has been clamouring for a higher bread ration for a long time – we would gladly co-operate by using smaller loaves.”

Many young housewives must have drawn on the First World War experiences of their mothers and grandmothers as to how to substitute for wheat in their recipes in 1946. The problem when substituting other grains and cereals for wheat in bread recipes is that only wheat contains sufficient gluten to give bread its characteristic structure. Gluten is a protein formed in wheat flour when water is added, and its long molecules form a firm elastic mesh which gives bread both its solidity and its lightness (by trapping air bubbles). Bread made with other grains may be very tasty, but without the gluten it has a more ‘cakey’ and soft texture.

Perhaps Eleanor was familiar with ‘Daily Menus for War Service’, by Thetta Quay Franks, published in 1918? It contained many recipes for 100% wheatless ‘War Breads’ from sources such as the Conservation Food Show, the U.S Food Administration, Farmers’ Bulletins and the Columbia War Papers.

We considered 16th C bishops and cardoons on this day last year.

Nothing in the whole range of domestic life more affects the health and happiness of the family than the quality of its daily bread. Mrs. Lincoln’s Boston Cook Book. 1884
Posted by The Old Foodie at 5:44 AM

We always cooked cornbread in a cast iron frying pan. A few tablespoons of oil in the bottom of the pan, then into the oven to heat until the oil is shimmering. Pour the cornbread batter in - it ought to sizzle - then bake as usual. Gives a lovely crunchy crust.

Hi Nene. How did you make the batter/dough? was it just with cornmeal, or did you add any other flours?