I happen to be in agreement with the late, great Alan Davidson on the topic of grapefruit. In The Oxford Companion to Food, he says “it is more suitable for use as a dessert fruit than in cooking, as its flavour is assertive and tends to swamp anything else”.

There will be those who disagree with the “more suitable for use as a dessert fruit than in cooking” I suppose, but I doubt any dissent on the Grapefruit is Assertive statement. It seems to me a rather swamping accompaniment to oysters, but perhaps some of my dear readers will disagree with me and will relish the following recipe, kindly provided by the food writer for the New Orleans newspaper The Daily Picayune, on this day in 1912

Grapefruit Cocktail And Other Grapefruit Recipes
Hostesses who have handsome grapefruit glasses, cut the pulp in large pieces, cover it with sugar and maraschino cherries or pieces of ginger, and heap it in the small inner glass. The outer one is filled with shaved ice.
Grapefruit salad is an excellent digester at the close of a heavy meal. It is better with French dressing than with mayonnaise, and should be marinated for at least half an hour before serving. Ices and sherbets of grapefruit are delicious. The use of halves of grapefruit as receptacles for oyster cocktails is by no means a new idea, and yet it is one of those unique combinations of flavors that can not be too widely known.
To prepare the grapefruit for this purpose the cook has to remove the seeds and core, and then, having filled the center with small, raw oysters, dress them, as for a cocktail, with tomato ketchup, grated horseradish, tobasco sauce, etc., without, of course, the use of lemon, for the pulp of the fruit itself will impart all the acidity required.

The grapefruit is a descendant of the Shaddock, or Pomelo (Citrus maxima). The Shaddock probably originated in SE Asia, and was taken to the West Indies in the 17th century. A close encounter with a sweet orange in (probably) Barbados resulted in a new hybrid. In 1750 this was referred to as “the forbidden fruit” by a clerical gentleman (the Rev. Griffith Hughes) who was apparently engaged in a theological discussion as to the real nature of the infamous Biblical fruit. By 1830 – a few years after it migrated to more entrepreneurial shores in Florida - the ‘forbidden fruit’ was recognised by horticulturalists as a distinct fruit (Citrus x paradisi). Its common name is not due to it tasting like grapes (it doesn’t), but for its growth in small bunches on the stem (far-fetched, but better than the grape story).

The new fruit was a bit problematic. It looked like a giant orange (and was often fraudulently sold as such) but it tasted … well, assertive. It was new and ‘exotic’ however, so housewives felt they had to fiddle with it in order to qualify as ‘hostesses’ when the husband’s boss came to dinner. Hence the invention of the grapefruit cocktail (raw or grilled/broiled).

The grapefruit, however, is not only assertive in taste, it does not give up its flesh easily, which does not make for a relaxed dinner. An elegant half-grapefruit (cut with ‘pinking sheared’ edges please) topped with a maraschino may look elegant, but retrieving the juicy segments tends to cause most inelegant splashes on the boss’s shirtfront (or worse, the boss’s wife’s bosom), which does not make for a relaxed boss. There proved to be an easy solution to this problem – grapefruit knives and grapefruit spoons were quickly invented, to the eternal gratitude of businessmens' wives ever since.

The wayward juice problem was eventually solved independently by a couple of clever people who had clearly – judging by the brilliance and passion of their ideas – been spattered not just across their bosoms, but perhaps more painfully, in the eyes. At last, the grapefruit was conquered. The two wonderful shirt and eye-saving contrivances appeared in the Modern Mechanix magazine in the 1930’s.

The ‘umbrella spoon’: this opens automatically when you dig your spoon in, creating a protective shield which then closes as you approach your mouth. 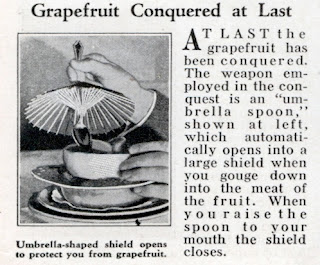 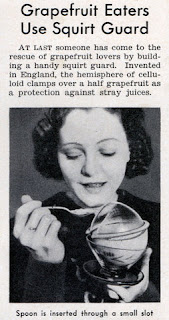 I truly don’t know how I have managed without one or both of these in my life. Will someone not revive these ideas and save me from hostess-embarrassment?

A Previous Story for this Day …
Frances Trollope comments on the domestic manners of the Americans.

Angie Dickinson, when asked IN 1985 what kept her young, said “Grapefruit juice and young men”
Posted by The Old Foodie at 5:23 AM

Thanks for that history lesson! I have always wondered why we Haitians called grapefruits, "chadek" (pronounced "sha-deck") while the French called them pamplemousse. And now, I know! One of those many throwback terms that we still use while the French don't.

Hello Sally - I think you get the prize for the most regular commenter on this blog!

Hell Peggy, thanks for stopping by - I love it when a puzzle is solved, dont you? Of course, it would be awful if we ever ran out of puzzles, wouldnt it? I've been over to visit your blog now - another bonus of readers leaving comments.

Thanks for the 101 on grapefruit. The taste is indeed assertive and aquired taste, to some extend. It is to me, at least.

I am so glad to have found your Old Foodie Blog! I am making a heritage cookbook for my daughters using recipes and memories from their grandmothers. I couldn't fathom an item mentioned in my great-grandmother's party menu on 2-6-07 (that would be 1907) for "Oyster Cocktail with Grapefruit". The recipe you posted answers the mystery!

Hello "unknown" - I am absolutely delighted to have filled in the gap for you!