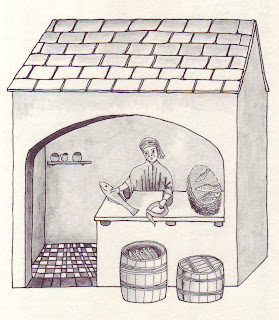 The siege of Orleans began in October 1428, and was finally relieved in May 1429 thanks to Joan of Arc. The English (aided by the Burgundians) may have ultimately lost the war and been forced to relinquish their goal to rule all of France, but they won a decisive battle on this day when they routed the French (aided by the Scots) who were attempting to intercept a supply convoy on its way to the English front line. The success was due to the strategy of the commander, Sir John Fastolf who repulsed the attack by forming a circle with his wagons, and placing his fearsome English archers on top to pick off the enemy. His convoy carried the usual consumable ingredients of war such as cannon balls and powder, which were the intended target of the French. It was also carrying a considerable number of barrels of herrings destined to feed the besieging troops during Lent, which somehow resulted in the conflict receiving its name of the ‘Battle of the Herrings’.

Herring and cod were important commodities for many centuries, and the search for sources of supply was a major motivator for the massive exploration efforts of the fifteenth and sixteenth centuries. They were important partly because they lent themselves well to preservation by drying, salting, and smoking, which were vital in the days well before refrigeration. They were also important because of the many meatless days on the religious calendar.

We have previously discussed the different sorts of herrings (bloaters, kippers etc) in a previous story. Today it seems particularly appropriate to consider the culinary connections of the Auld Alliance between the Scots and the French, particularly as they apply in the herring department.

Mistress Meg Dods, the pseudonymous author of Scottish publication The Cook and Housewife’s Manual in 1826, gives this recipe:

Pickled Herrings: a French way for a rere-supper.*
Wash the herrings; cut off the heads and tips of the tails; skin them; steep them in lukewarm milk and water, and dry and broil them; dish with slices of raw onions and rennets, and serve with oil.
[*A rere-supper is a ‘second supper’ following a normal supper, usually very late at night]

Time has weakened the Auld Alliance of course, and Mistress Dods was certainly no Francophile, for this is what she has to say about the cooking of fish in France:

‘Fish is not so well dressed in Paris as in London or the Hague. The cooking au bleu, à la Genevoise, &c., is in fact practiced chiefly to disguise the want of that first quality of all fish, which les poisons equivoques of Paris rarely possess – freshness. The French, however, dress fish better, or at least more variously, than we do, as in vol-au-vent, and as rissoles, salpiçons, but above all, au gratin. No 688’

And here is Recipe 688, for you to consider its virtues. It is certainly more elegant than broiled herrings with raw onion.

Soles, Flounder, and other small flat Fish, or Fillets of Turbot, &c., au Gratin.
Have a flat silver dish, or tin baking pan, and spread a bit of fresh butter over it. Mince, very finely, parsley, eschalots, and mushrooms; season with pepper and salt, fry the herbs, and lay them in your buttered dish. Place your fish, neatly cut and trimmed, over this, and cover with fine breadcrumbs. Over this stick a few bits of butter; moisten with a little white wine; cook under a furnace with a few embers, that the gratin may get crisp; squeeze lemon over our dish, and serve it very hot. The gratin may be browned with a salamander, and fried sippets may be stuck over the dish. Small undressed fish may be divided, have the bones taken out, and be baked au gratin, arranging the pieces en miroton.

Some fishes become extinct, but Herrings go on forever. Herrings spawn at all times and places and nothing will induce them to change their ways. They have no fish control. Herrings congregate in schools, where they learn nothing at all. They move in vast numbers in May and October. Herrings subsist upon Copepods and Copepods subsist upon Diatoms and Diatoms just float around and reproduce. Young Herrings or Sperling or Whitebait are rather cute. They have serrated abdomens. The skull of the Common or Coney Island Herring is triangular, but he would be just the same anyway. (The nervous system of the Herring is fairly simple. When the Herring runs into something the stimulus is flashed to the forebrain, with or without results.) Will Cuppy, How to Become Extinct, University of Chicago Press, Chicago, 1984.
Posted by The Old Foodie at 5:53 AM

Here in Holland, a favorite snack is brined raw herring with onions. The herring is deboned, the head and scales removed, although the tail remains. One covers the fish with chopped onions, grasps it by the tail, and lowers it into the mouth. Dutch sushi, I call it. Herrings are also eaten pickled. When the fishing fleet comes in with its cargo of fresh new herring (Vlaggetjes Dag - Flags Day), the first keg of brined herring is auctioned off for a very nice price to the highest bidder. Every year, there's much discussion on the quality of the year's herring, how fat it is, etc. Blech. I hate the stuff!

Few people have heard of the Auld Alliance or know that Scots fought with Joan of Arc. There are some good pages about it at MaidofHeaven.com