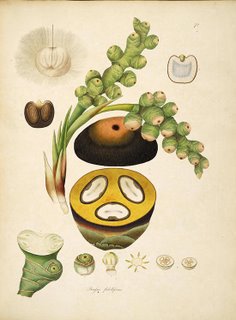 The Endeavour , with Joseph Banks aboard, was in the Savu Islands west of Timor on this day in 1770. Banks made his usual copious notes on local life.

“ … the fan-palm requires more particular notice, for at certain times it is a succedaneum for all other food both to man and beast. A kind of wine, called toddy, is procured from this tree, by cutting the buds which are to produce flowers, soon after their appearance, and tying under them small baskets, made of the leaves, which are so close as to hold liquids without leaking. The juice which trickles into these vessels, is collected by persons who climb the trees for that purpose, morning and evening, and is the common drink of every individual upon the island; yet a much greater quantity is drawn off than is consumed in this use, and of the surplus they make both a syrup and coarse sugar. …”

Banks was discussing toddy from the fan palm, but it can be made from many of the thousands of species of palm tree in the tropical forests of the world, and has many local names. It has a short shelf life as fermentation starts within a couple of hours of collection and proceeds apace so that the wine quickly becomes vinegar – unless it is distilled into a potent spirit, which also goes by many local names. One of the names – “arrack”*, from the Arabic word for sweat or juice – has gradually become applied to such a wide variety of drinks that it is almost a generic term.

Language is a growing beast of course, and many adaptations and assimilations have a quirky beauty or humour all their own. There is a wonderful example in the wonderfully eccentric William Kitchiner’s “Cook’s Oracle” (1817):

Mock Arrack.
Dissolve two scruples of flowers of Benjamin in a quart of good rum, and it will immediately impart to it the inviting fragrance of “Vauxhall nectar”.

The “Vauxhall nectar” is his tongue-in-cheek reference to “Arrack punch” – both innocuous names for the obviously potent signature drink of the London pleasure gardens of the same name. The magic flavour additive he calls ‘Flowers of Benjamin’ is gum benzoin – a fragrant resin obtained from Styrax benzoin, a tree found in Sumatra and very popular in medicinal remedies and perfumery. By the Chinese-whispers process the strange word‘benzoin’ became the common name ‘Benjamin’.

[*to be distinguished from Arak, a Middle Eastern spirit with an aniseed flavour.]

Another Recipe for the Day …

You now have the Mock Arrack recipe, and if you combine this with a Mock Asses’ Milk recipe from Friday’s story, heat it up, and you will end up with something perhaps appropriately named Mock Mock Hot Rum Toddy. It might be a good nightcap after Kitchener’s Mock Mock Turtle Soup. No, “mock mock” is not a mistake missed by the grammar checker, Kitchener also has a recipe for basic Mock Turtle Soup, which is “an attempt ... to imitate the excellent and generally approved Mock Turtle made by Messrs. Birch, Cornhill” – which was canned. In modern parlance, go figure.

Mock Mock Turtle Soup.
Line the bottom of a stew-pan that will hold five pints with an ounce of nice lean Bacon or Ham, a pound and a half of lean gravy Beef, a Cow-Heel, the inner rind of a carrot, a sprig of lemon-thyme, winter savoury, three times the quantity of parsley, a few green leaves of sweet basil, and two eschalots; put in a large Onion, with four cloves stuck in it, eighteen corns of allspice, the same of black pepper; pour on these a quarter of a pint of cold water, cover the stew-pan, and set it on a slow fire, to boil gently for a quarter of an hour: then, for fear the meat should catch, take off the cover, and watch it; and when it has got a good brown colour, fill up the stew-pan with boiling water, and let it simmer for two hours; - if you wish to have the full benefit of the meat, only stew it till it is just tender, cut it into mouthsful, and put it into the soup. To thicken, pour to two or three table-spoonfuls of flour, a ladleful of the gravy, and stir it quick till it is well mixed; pour it back into the stew-pan where the gravy is, and let it simmer gently for half an hour longer, skim it, then strain it through a tamis into the stew-pan: cut the cow-heel into pieces about an inch square, squeeze through a sieve [with?] the juice of a lemon, a table-spoonful of mushroom catchup, a tea-spoonful of salt, half a tea-spoonful of ground black pepper, as much grated nutmeg as will lie on a sixpence, and a glass of Madeira or Sherry wine; let it all simmer together for five minutes longer. Forcemeat or Egg-balls may be added if you please.

There has never been a better marriage made in heaven than that between food and wine. Baudelaire.
Posted by The Old Foodie at 5:35 AM

toddy in Malaysia is a whitish wine from coconut flowers and gets many estate workers intoxicated.

Is a gourmet drink for city folks, as a cheaper alternative to real wines and beer.

ever tried it yourself ?

Hello tonixe: I have never had toddy, but I will, as soon as I get the chance. Does it taste coconutty?