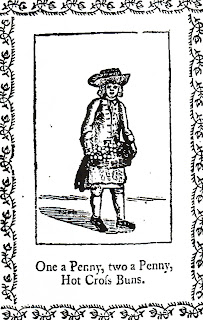 Hot cross buns are traditionally eaten on this day wherever there is a historically Christian culture. The cross is intended to symbolise the crucifixion, and in their purest form the buns have no butter or milk or eggs, as befits the season of Lent.

As with so many traditional foods, a large number of myths abound, and these range from the amusing to the ridiculous. One story insists that the buns date back to pagan rituals, but as the first recorded us of the phrase ‘cross buns’ was in 1733, this seems a tad unlikely.

Some foods never date, and sweet, fruity bread buns are one of them. I give you this recipe from the ever-reliable Cassell’s Dictionary of Cookery (circa 1870’s). Vary them at your whim. I believe some people even put choc-chips in them.

Good Friday Buns (commonly called Hot Cross Buns)
Rub a quarter of a pound of butter into two pounds of flour. Add a pinch of salt; then mix a wine-glassful of fresh, thick yeast with a pint and a half of warmed milk, and stir these into the flour till it forms a light batter. Put the batter in a warm place to rise. When sufficiently risen, work into it half a pound of currants, half a nutmeg, grated, and a quarter of an ounce of powdered mace. Knead these well into the dough, make it up into buns, and place them on buttered baking tins. Make a cross on them with the back of a knife, brush a little clarified butter over the top, and let them stand a quarter of an hour before the fire. Bake in a good oven.

Next week as befits the Easter Season, we will have an Egg Theme. We will eat our way through five centuries of Egg Recipes, starting with the 16th C on Monday.
Posted by The Old Foodie at 6:01 AM

A good, straight-forward recipe for once!

Hi Sally - Yes, I thought I'd make it easy today (you didnt whip up the Spanish Olio for dinner yesterday?)

It would be interesting to try and make these -- I am most familiar with the store variety and the thick double strip of icing use to represent the cross. This sounds a bit more subtle!

That's a rather yummy-looking yeast bun recipe. As soon as Passover is past and I'm allowed yeast again, I think I'll make it to celebrate. No cross on top, though.

Now you've got me wondering if there are any British 18th century Passover recipes, or they're all Continental? Except that I'm four days into the festival and too tired to check it out.

Hi Gillian - you sent me to the books. I have emailed you a couple of Passover recipes from Cassell's Dictionary of Cookery. I haven't yet looked for any 17th c recipes from England, but I'll let you know what I find.

Dear old foodie. My wine glasses are huge - that's actually the range they come from. I'm not sure they'll be too precise when making these Hot Cross Buns!