An Endive by any other Name. 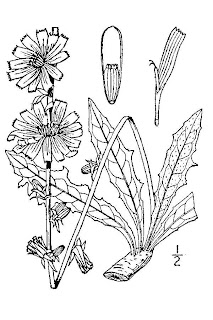 Ann Frank was thirteen-years old in July 1942 when she and her family attempted to escape Nazi persecution in Amsterdam by going into hiding in a “Secret Annexe” in her father’s office building. Friends and employees of her father supplied them with whatever spare food they could obtain. They lived in the hidden rooms for two years.

On this day in 1944 Anne commented about the tedium of some of their meals. A little over two years after this diary entry, Ann was dead – a victim of typhus in the infamous Bergen-Belsen camp where she was sent after her family was betrayed and their hiding place discovered.

“In the twenty one months that we've spent here we have been through a good many 'food cycles'...periods in which one has nothing else to eat but one particular dish or kind of vegetable. We had nothing but endive for a long time, day in, day out, endive with sand, endive without sand, stew with endive, boiled or 'en casserole;' then it was spinach, and after that followed kohlrabi, salsify, cucumbers, tomatoes, sauerkraut, etc., each according to the season.”

Ann would have been in no confusion about ‘endive’. Greengrocers in different locations nowadays might call it ‘chicory’, but other greengrocers might sell a thick root vegetable by the name of ‘chicory’. Sometimes ‘witloof’ and ‘escarole’ get into the confusion act too. We might also have to factor in the translator’s error or opinion as well when we consider Ann’s endive dinners. This sort of confusion is begging for some clarification, so here is my attempt to set myself straight.

Firstly, both endive (Cichorium endiva) and chicory (Cichorium intybus) are members of the same family, as their name suggests. Endive is grown and eaten for its leaves, which have two main forms – curly and broad-leafed. This is where confusion number one turns up. In the USA the curly form is often called chicory, and the broad-leafed form is often called escarole. Whatever it is called, endive is used in salads, or cooked as one would spinach.

Chicory (Cichorium intybus) is a popular salad vegetable in Europe, particularly when the tight leafy heads are ‘forced’ (grown in the dark). Confusion number two is that this form is called ‘witloof’ or Belgian or French Endive. The root of the chicory plant is also cooked as one would any other root vegetable, and it has had a starring role as a coffee substitute (‘ersatz’ coffee), coffee alternative (supposedly healthier), or coffee additive.

In 1915 a collection of recipes provided by Belgian refugees was published under the title The Belgian Cook-Book in England. The Belgians know all about endive.

Flemish Endive
Choose twelve endives that are short and neat; cut off the outside leaves and pare the bottom; wash them in plenty of water, and cook them in simmering water for three minutes. Then take them from the water and place them in a well-buttered frying-pan, dust them with salt and also with a pinch of sugar. Add the juice of half a lemon, and rather lessthan a pint of water. Place the pan on the fire for two or three minutesto start the cooking, then cover it closely, and finish the cooking by placing it in the oven for fifty minutes. Take out the endives and put them in the vegetable-dish and pour over them the liquor in which they have been cooked. This liquor is improved by being reduced, and when off the fire, by having a small piece of butter added to it.The above recipe can be used for chicory as well as for endive.

Stuffed Chicory
Make a mince of any cold white meat, such as veal, pork or chicken, and add to it some minced ham; sprinkle it with a thick white sauce. In the meantime the chicories should be cooking; tie each one round with a thread to keep them firm and boil them for ten minutes. When cooked, drain them well, open them lengthwise very carefully, and slip in a spoonful of the mince. Close them, keeping the leaves very neat, and, ifnecessary, tie them round again. Put them in a fire-proof dish with a lump of butter on each, and let them heat through. Serve them in their juice or with more of the white sauce, taking care to remove the threads.
Tomorrow’s Story …

We found out about
Posted by The Old Foodie at 5:39 AM

Thank you Janet! I've often been confused by these vegetables. Very good post.

Yes, 'witloof' is well known in Holland, although I don't like it very much. Witloof, btw, is literally translated as 'white leaf' and eaten often at Easter time. Andive is, as you say,a different vegetable, and is often served here in winter cooked with a cream sauce (like spinach).

What do you think she meant by sand?