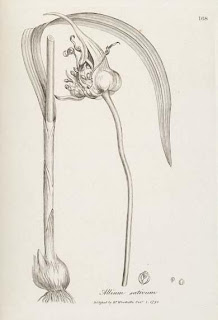 The plant of the day according to the medieval calendar is garlic (Allium sativum*), dedicated to St Leo. I have no idea why he should have garlic dedicated to him, but I am grateful as it gives us an excuse to have bloggy fun with garlic.

Garlic probably has more folklore associated with it than any other plant food, which is not surpising due to its ancient origins (more myth-making time), widespread distribution (more myth-making people) and its strong smell and pungent taste (more provocative of opinion).

Ancient and smelly plants inevitably end up with medicinal and mystical attributes (which may be the same thing), and garlic is no exception. Historically it has been claimed to cure a whole alphabet of diseases from asthma, baldness, consumption and dropsy to at least as far as leprosy and plague, and to be useful to ward off the evil eye, evil spirits, evil snakes, and evil vampires.

As for its culinary use, the world seems to be divided into two camps – the camp that uses it with frantic abandon, and the camp that, if it uses it at all, uses it in the Victorian English way of wiping a single clove over the bottom of the pan (twice only) before adding the other ingredients, then throwing away the clove. I am of the former camp myself.

The medicinal, mythical, mystical, and culinary uses come together nicely in something called ‘Four Thieves Vinegar’. The story is that during an epidemic of the plague in Marseilles in 1722, four thieves made a good living from plundering the bodies of plague victims but escaped contagion themselves. They attributed their protection to the liberal application or ingestion (the stories vary here) of a special vinegar infused with herbs and garlic. There are many recipes for the vinegar, which is eminently adaptable to the fragrant ingredients on hand, but they do all include garlic. Here is one version of it from The Virginia Housewife (1860) by Mary Randolph. I cannot vouch for its efficacy in treating the plague, I would suggest you seek medical advice in that instance, but with the proper selection of herbs along with the garlic, it would make a fine base for a salad dressing.

Vinegar Of The Four Thieves.
Take lavender, rosemary, sage, wormwood, rue, and mint, of each a large handful; put them in a pot of earthen ware, pour on them four quarts of very strong vinegar, cover the pot closely, and put a board on the top; keep it in the hottest sun two weeks, then strain and bottle it, putting in each bottle a clove of garlic. When it has settled in the bottle and become clear, pour it off gently; do this until you get it all free from
sediment. The proper time to make it is when the herbs are in full vigour, in June. This vinegar is very refreshing in crowded rooms, in the apartments of the sick; and is peculiarly grateful, when sprinkled about the house in damp weather.

[* thanks to Judy (see the comments) for correcting me on this, I had Allium ursinum, which is the wild form of garlic]

We had a story about coffee substitutes during the American Civil War.

The emotional content of garlic almost equals its culinary value. Arthur E Grosser.
Posted by The Old Foodie at 5:59 AM

Garlic is lovely! You can never have too much of the stuff, although I draw the line at garlic ice cream.
The 'Four Thieves Vinegar' recipe is interesting; I've seen variations around. One thing is that this particular recipe probably wouldn't be very tasty on account of the wormwood and rue, which are bitter as heck.

I'm a botany/anthropology student (or will be, again, once my daughter starts school) and you may find it interesting that Four Thieves Vinegar WOULD repel insects, including the fleas that carried the Black Death. I doubt the rats, who carried said fleas, would have liked the vinegar, either.

If enough of the stuff was ingested, the body would exude a lot of the chemicals, and so would work as a very successful bug repellent. (Probably had an antibacterial effect internally, too.) With the wormwood and rue in it, though, personally I'd rather wear it as a body splash and hope for the best. (When I lived in Hawaii I used lavender as bug repellent. I was always bitten less than the people around me who used chemical bug sprays.)

A small correction - Allium ursinium is the Latin name for wild garlic, also known as ramps. Very tasty they are too. The more familiar, pungently aromatic garlic of our kitchens is Allium sativum.

Don't mind me. I'm persnickety about plant names, comes from teaching a few classes at a botanic garden I suppose.

Hi Judy - thanks for the correction - I think pernickety is good.
Nene - you are right about the bitterness with rue and wormwood - what do you suggest as substitutes to make this an "edible" vinegar?

"Vinaigre des quatre Voleurs" or
Vinegar of the Four Thieves has been recommended for many uses: keeping the Plague at bay, repelling insects, as a household cleaner, as a nose gay, and a lovely personal perfume. It's medicinal, anti-bac, and skin beautifying properties are easily noted in many forms of this cosmetic herbal preparation. It is not, and never has been, created for ingestion.

Please remember to include the provisio for pregnant women. Any contact with most recipes of Four Thieves, esp. with the Rue, mugwort, or wormwood, can be aborfacient.