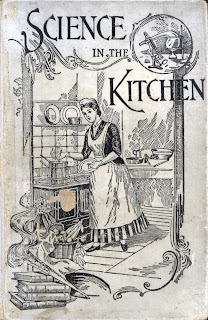 We have met Ella Kellogg, the wife of Johh Kellogg of cornflake fame, in a previous story. Ella wrote a book with the impressive title of Science in the Kitchen. A Scientific Treatise on Food Substances and their Dietetic Properties, Together with a Practical Explanation of the Principles of Healthful Cookery, and a Large Number of Original, Palatable, and Wholesome Recipes, which was published in 1893. The Introduction is dated April 20th 1892.

Did Ella feel a special thrill as she signed and dated her book? Did she celebrate in some way? Ella and John did not leave themselves many celebratory activities to use for special occasions. They pursued the sort of philosophy of life that defines itself by negatives – their marriage was celibate, they were teetotal, and ate only food that was 'palatable and wholesome'.

Most of us would at least have a cake on a special day. Ella warns about the dangers of Pastry and Cake:

So much has been said and written about the dietetic evils of these articles that their very names have become almost synonymous with indigestion and dyspepsia. That they are prolific causes of this dire malady cannot be denied, and it is doubtless due to two reasons; first, because they are generally compounded of ingredients which are in themselves unwholesome, and rendered doubly so by their combination; and secondly, because tastes have become so perverted that an excess of these articles is consumed in preference to more simple and nutritious food.
But does not forbid it:
… We do not wish to be understood as in sympathy with that class of people who maintain that dyspepsia is a disciplinary means of grace, when, after having made the previous statement, we proceed to present recipes for preparing the very articles we have condemned. Pie and cake are not necessarily utterly unwholesome; and if prepared in a simple manner, may be partaken of in moderation by persons with good digestion.

And here is one of her simple cakes, to be eaten in accordance with her caveats:

Sponge Cake.
For this will be required four eggs, one cup of sugar, one tablespoonful of lemon juice with a little of the grated rind, and one cup of white flour. Success in the making of sponge cake depends almost wholly upon the manner in which it is put together. Beat the yolks of the eggs until very light and thick, then add the sugar little by little, beating it in thoroughly; add the lemon juice and the grated rind. Beat the whites of the eggs until perfectly stiff and firm, and fold or chop them very lightly into the yolk mixture. Sift the flour with a sifter little by little over the mixture and fold it carefully in. On no account stir either the white of the eggs or the flour in, since stirring will drive out the air which has been beaten into the eggs. Do not beat after the flour is added. The cake, when the flour is all in, should be stiff and spongy. If it is liquid in character, it will be apt to be tough and may be considered a failure. Bake in a shallow pan in a rather hot oven fifteen or twenty minutes.
You can even ice it too, as long as you remember that as “icing adds to the excess of sugar contained in cakes, it is preferable to use them without it except when especially desired for ornament”

As for meat, Ella had strong views about it. She and John were militantly vegetarian themselves, but in her book she accepts that some will insist on it in their diet. She gives a number of dire warnings about its dangers:

… Besides being in no way superior to vegetable substances, they contain elements of an excrementitious character, which cannot be utilized, and which serve only to clog and impede the vital processes, rendering the blood gross, filling the body with second-hand waste material which was working its way out of the vital domain of the animal when slaughtered. To this waste matter, consisting of unexpelled excretions, are added those produced by the putrefactive processes which so quickly begin in flesh foods exposed to air and warmth.
But, much to my surprise, she includes this little gem of a recipe idea.

Birds Baked in Sweet Potatoes.
Small birds, of which the breast is the only suitable portion for eating, may be baked in the following manner: Cut a sweet potato lengthwise; make a cavity in each half. Place the breast of the bird therein; fit, and tie together carefully; bake until the potato is soft. Serve in the potato.

On This Topic …
John and Ella (and her book) featured in a story called Sex and Science in the Kitchen.

Another recipe from her book is HERE.
Science in the Kitchen can be found at the Feeding America site.

We had a Tale of Timbuktoo.

No diet will remove all the fat from your body, because the brain is entirely fat. Without a brain you might look good, but all you could do is run for public office. Covert Bailey
Posted by The Old Foodie at 6:32 AM

So interesting to hear about an early food scientist. But it is tough to fully support someone who is on the fence when it comes to cake and pastry ...

Oh! Thanks for making me look up klismaphilia O.F.... That just made my day... LOL Maybe it's a good thing they were celibate, huh?

Hello t.w. I dont know that Ella was a real scientist, she just used the jargon. What a sad negative fear-filled approach to life. I have another retro cake recipe for you on Tuesday t.w., but Ella wouldnt approve.

Sally. Glad to hear your vocabulary has increased as a result of my blog. You know what they say, different strokes for different folks ....