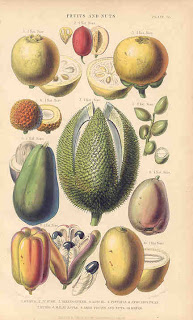 Theodore Roosevelt, ex-26th President of the USA, his son Kermit, and an assortment of scientific types took part in an expedition to Brazil in 1914 to map the course of a river in the Amazon jungle. He published an account of his adventures in Through the Brazilian Wilderness, and it is a fascinating tale of swirling rapids, bizarre animals, strange foods, and the usual quota of episodes of life-threatening high drama appropriate for a wilderness pioneer – including the murder of one member of his party.

In March 1914 the party camped for a few days to build several canoes, having found several suitable trees for that purpose. While the canoe-builders were at work, Roosevelt and his son explored the immediate vicinity

“One morning while the canoes were being built Kermit and I walked a few kilometres down the river and surveyed the next rapids below. The vast still forest was almost empty of life. We found old Indian signs. There were very few birds, and these in the tops of the tall trees. We saw a recent tapir track; and under a cajazeira tree by the bank there were the tracks of capybaras which had been eating the fallen fruit. This fruit is delicious and would make a valuable addition to our orchards. The tree although tropical is hardy, thrives when domesticated, and propagates rapidly from shoots. The Department of Agriculture should try whether it would not grow in southern California and Florida.”

The cajazeira belongs to the Spondias spp. of the same family as the cashew. It goes by many names – ubos, mombin, hog-plum, ciruela and a whole lot more. Apparently the Amazon Indians use it as bait to catch the tapir, which gives rise to one of its local names of taperiba or “fruit of the tapir”. The animal which Roosevelt mentions – the capybara, is a huge aquatic rodent which no doubt also served as food to the indigenous people as well as hungry explorers.

Our problem is that there does not appear to be any blog-friendly, accessible, relevant recipes for the Brazilian delicacies mentioned so far in the narrative. On this exact day in 1914 however, they do find and lose, an important food familiar to us all.

“On the morning of March 22 we started in our six canoes. We made ten kilometres. Twenty minutes after starting we came to the first rapids. Here every one walked except the three best paddlers, who took the canoes down in succession—an hour’s job. Soon after this we struck a bees’ nest in the top of a tree overhanging the river; our steersman climbed out and robbed it, but, alas! lost the honey on the way back.”

A Brazilian honey recipe then? From the same era preferably. I turned hopefully to The international cook book; over 3,300 recipes gathered from all over the world, by Alexander Filippini, published in 1906. The book contains suggested menus for every day of the year, and the 22nd of March 1914 was the third Sunday of the month. The recommended dinner for that day was:

How amazing a co-incidence is that! Creme, Amazone (Cream Soup, Amazon) on the menu. The name comes from the secret ingredient – the alligator pear or avocado, fruit of the testicle tree, and a native of South America.

Creme, Amazone.
Peel and cut into small pieces three fresh, alligator pears and place in saucepan with two branches parsley, two branches sliced celery, four pints cold milk. Season' with one and a half teaspoons salt, two saltspoons cayenne pepper and a saltspoon grated nutmeg. Set the pan on the fire and let slowly boil for thirty-five minutes. Strain milk into a basin, place ingredients in a mortar and pound to a smooth paste, and return to the milk. Heat one ounce of butter in a saucepan, add two ounces flour, stir for a minute with a wooden spoon, then pour contents of basin into this pan. Sharply whisk for two minutes, and, as soon as it comes to a boil add one gill cream and one egg yolk diluted with a tablespoon milk. Mix with a wooden spoon for three minutes, being careful not to allow to boil again ; strain through a Chinese strainer into a soup tureen, and serve with bread croutons separately.

A wartime Beetroot Pudding was the recipe in our story on this day last year.

Quotation for the Day...

Camping is nature's way of promoting the motel business. Dave Barry
Posted by The Old Foodie at 5:35 AM