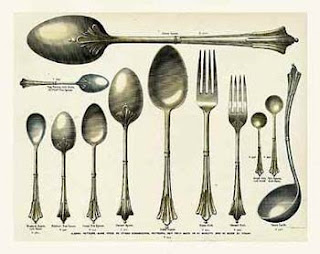 The first meeting of the society of Les Amis d’Escoffier was held at the Waldorf-Astoria on this day in 1936. The aim of the society was to preserve and honour the memory of the man called “The Chef of Emperors and the Emperor of Chefs”.

There are strict rules at dinner meetings of Les Amis – all designed to ensure that the focus remains on the food. One seemingly strange rule is that the napkin (the "La Serviette au cou") must be tucked into the collar to ensure that all members are seen as equals in the art of gastronomy - presumably as this hides expensive old school or regimental ties, diamond tie-pins and the like. Women were not admitted to the society until the 1950’s, so I do wonder what has happened to the rule since then. All cleavages are not created equal. Do women members have to wear high-necked collared dresses in order to tuck in their napkins? Someone in the know, please enlighted us all.

The dinner rules appear on the menu for the society dinners under the heading “For the Perfect Enjoyment of This Dinner.” Drunkeness, smoking, and the use of cell phones are forbidden which makes obvious sense, but speech-making too is banned as being distracting from attention on the food. The society goes even further on the talking at table with this rule:

Les Amis d’Escoffier Society of New York is dedicated to the art of good living only, it is forbidden, under threat of expulsion, to speak of personal affairs, of one’s own work or specialty, and more particularly, to attempt to use the Society as a means of making business contacts. It is unnecessary to elucidate further on this delicate subject, which everyone understands. Furthermore, at these dinner-meetings reference will never be made on the subjects of: politics, religious beliefs, personal opinions of either members or guests, irrespective of their profession or social status.

Should this rule be more widely applied – or at least encouraged – at a wider range of dinners do you think?

We have previously considered some Escoffier recipes:

Today, in honour of the American society, here is one of Escoffier’s
Salades Composées (Compound Salads). I must say, it doesn’t particularly appeal to me, but I cant just include my own favourites, can I?

American Salad.
Tomatoes, pineapple, orange, banana, cos lettuce, mayonnaise.
Peel, seed, and slice the tomatoes, cut the pineapple in small slices, peel and divide the orange into sections and slice the banana thinly. Cut the lettuce in half and arrange the fruits alternately on it.
Serve with a thin mayonnaise sauce or cream to which orange and lemon juice, salt and a pinch of sugar have been added.

Last year on this day …

Monday's Story ...
The loves of Casanova.
Quotation for the Day …

So long as people don’t know how to eat they will not have good cooks. Escoffier.
Posted by The Old Foodie at 5:42 AM