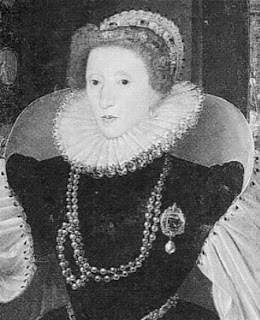 This day in 1572 was the day before Good Friday. This is known as Maundy Thursday in the Christian calendar, and in the United Kingdom is the day that the monarch traditionally dispenses ‘alms’ or gifts to the same number of poor folk as the years of the monarch’s age. Until the time of James II, part of the proceedings of the day included the ceremonial washing (and kissing) of the feet of those poor folk by the monarch, as Christ had washed the feet of his disciples.

In 1572 the monarch was Elizabeth I. She was 39 years of age, so 39 poor women were selected and were lined up to receive the royal wash. It was clearly felt that some concessions had to be made to narrow the gulf between the potentially unpleasant feet of the recipients and the refined hands and lips of The Queen, so the feet were pre-washed by the Yeoman of the Laundry, then the Sub-Almoner, then the Almoner.
After the fourth, final, and royal foot-washing, the lucky 39 were given their alms or ‘maundy’, which in Elizabeth’s time included a selection of gourmet foods:

“ … certain yards of broadcloth to make a gown … a pair of shoes … to each of them a wooden platter, wherein was half a side of salmon, as much lyng, six red herrings, and two cheat lofes of bread. Fifthly, she began with the first again, and gave to each of them a white wooden dish with claret wine. …white purses wherein were thirty-nine pence (as they say) after the number of years of her majestys age … red leather purses each containing twenty shillings a piece … “

Presumably the fish was given because meat-eating was still forbidden for a few more days – but what a great selection of fish! Not much abstention and denial there.

The anonymous author of A Proper newe Booke of Cokerye, published in the mid-sixteenth century, gave the following instructions for cooking and serving fish:

A Pyke sauce for a Pyke, Breme, Perche, Roche, Carpe, Eles, Floykes and al maner of brouke fyshe.
Take a posye of Rosemary and time and bynde them together, and put in also a quantitye of perselye not bounde, and put into the caudron of water, salte andyeste, and the herbes, and lette them boyle a pretye whyle, then putte in the fyssheand a good quantitye of butter, and let them boyle a good season, and you shall have good Pyke sauce.
For all those fysshes above wrytten yf they muste bee broyled, take sauce for them, butter, peepper and veneger and boyle it upon a chafyngdyshe and then laye thebroyled fyshe uppon the dysche; but for Eeles and freshe Salmon nothing but Pepper and vyneger over boyled. And also yf you wyll frye them, you muste take a good quantitie of persely, after the fyshe is fryed, put in the persely into the fryinge panne, and let it frye in the butter and take it up and put it on the fryed fyshe, and frye place, whyttinge and suche other fyshe, excepte Eles, freshe Salmon, Conger, which be ever fryed but baken, boyled, roosted or sodden.

Give a man a fish and he has food for a day; teach him how to fish and you can get rid of him of the entire weekend. Attributed to many people (all women).

Did that lead to Good Friday's traditional smoked cod with parsley-flecked white sauce? We still do that.

I'd never heard that quote before! Too funny!