How Long is a Leek? 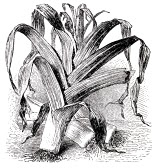 Today is St David’s Day, a special day for all people of Welsh heritage, who will – if they are true patriots – identify themselves by wearing a leek somewhere on their persons (most usually their hats). Those whose patriotism is weaker, or sensitivity to odours stronger, may choose instead to wear a daffodil, which is a modern upstart of a national symbol if ever there was one.

The leek was a well-established symbol of Wales by the time of Shakespeare, who refers to it in Henry V (see the quotation for the day). Before the sixteenth century myth gets in the way of history. The stories say that the leek matched the Welsh archers uniforms of green and white (nice to see that colour co-ordination of uniforms was important even then) and that they wore the leek in their helmet to distinguish themselves from the enemy (were the enemy wearing green and white too?) Whether the enemy was the Saxons, the French at Crecy in 1346 or the French at Agincourt in 1415 or none of the above is no matter to us, we must focus on the leek as food, not the leek as military decoration.

Although the leek is the species of onion most associated with Wales, one alternative name for the spring onion or scallion is Welsh Onion, which to add to the confusion is also called the stone leek. Why is it so called? Interestingly, it touches on the concept of Welsh Rabbit (or Rarebit if you insist on perpetuating the error), which was the subject of an earlier story. The word ‘Welsh’ comes from the Anglo-Saxon word for ‘foreigner’, which is how the Saxons viewed their wild enemy in the West.

With such a large number of onion-leek-like vegetables with similar form and colouring, how do we decide what is a true leek? The European Union has made some rules to help us, but had the insensitivity to institute these on St David’s Day in 2002, which some Welsh folk took very personally. These are the major points of the rules:

Class I leeks must be of good quality. The white to greenish white part of the leeks must represent at least one third of the total length or half of the sheathed part. Size is determined by their diameter measured at right angles to the longitudinal axis above the swelling of the neck. The minimum diameter is fixed at 8mm for early leeks and 10mm for other leeks.

For today’s recipe, we go to Mrs Beeton (1861) because (quoting from Beeton’s Dictionary of Universal Information) she gives an alternative, very pacifist version of the Welsh-Leek association. She says:

It probably originated from the custom of Cymhortha or the friendly aid, practised among farmers. In some districts of South Wales, all the neighbours of a small farmer were wont to appoint a day when they attended to plough his land, and the like; and, at such time, it was the custom for each to bring his portion of leeks with him for making the broth or soup.

Here then, is her recipe for leek soup, and it really doesn’t matter how your leeks measure up for it to be a success.

Mode: Prepare the head, either by skinning or cleaning the skin very nicely; split it in two; take out the brains, and put it into boiling water; add the leeks and seasoning, and simmer very gently for 4 hours. Mix smoothly, with cold water, as much oatmeal as will make the soup tolerably thick; pour it into the soup; continue stirring till the whole is blended and well done, and serve.

The story was about rice pudding.

Fluellen: Your majesty says very true: if your majesties is remembered of it, the Welchmen did goot service in a garden where leeks did grow, wearing leeks in their Monmouth caps; which, your majesty knows, is an honourable padge of the service: and, I do believe, your majesty takes no scorn to wear the leek upon Saint Tavy's day.
King Henry: I wear it for a memorable honour: for I am a Welch, you know, good countryman. Shakespeare (Henry V)
Posted by The Old Foodie at 5:42 AM

A sheep's head??!! Ack. I'll stick to vichyssoise, thanks. Particularly if I have to cook it.

The sheeps head in the recipe startled me, too, but I guess it's better found in a recipe than, like the leek, being carried around on oneself in public as a symbol of national pride on some designated holiday.

But maybe not. That might be rather fun. And definitely amusing. :)

Hi I dropped by after a recommendation from 'little miss moi' as she noticed I had also done a St David's day post. Mine is much less informed than yours. I enjoyed the recipe but I think I'll stick to my own version of leek soup.

Hi Karen - I could probably manage the sheep's head (my grandmother was a Scot, so perhaps it is genetic) - but the eye would have to be removed by someone else. I'm not normally squeamish, but an eye peering dolefully out at me from the murky depths of a pot of soup would be appetite-suppressing. I have a great-grandparent from Wales too but decided that was not close enough to justify onion-scented hair on a work-day.
Hi chrisb - thanks for stopping by - it is nice to meet Sam's mum.