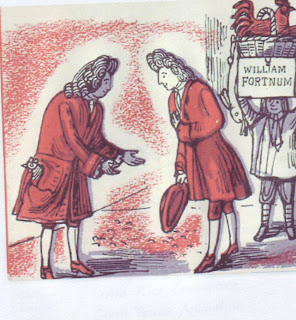 The famous store of Fortnum & Mason was appointed Grocers to HRH the Prince of Wales on this day in 1863.

The tradition of recognising tradesmen who satisfactorily supplied the Royal Household by the issuing of a Royal Warrant of Appointment was established in the 15th century. During the 64 year reign of Queen Victoria, she and her large family issued over 2000 Royal Warrants, which means that over 2000 merchants and tradespeople jumped through a few hoops to get the right to display the prestigious badge.

A business must satisfactorily supply a product or service to the royal household for five years before it is eligible to apply for consideration for a Royal Warrant by the
Royal Household Tradesmen's Warrants Committee. The final decision is made by The Family member himself or herself, which in the case of the current Prince of Wales, means it must also have satisfied him as to their environmental policy. The warrant is granted for ten years before it is reviewed, although the warrant-holder must re-register annually.

William Fortnum got an inside view of the way royalty worked in his job as a footman in Queen Anne’s household in 1707. He persuaded his landlord, Hugh Mason to go into the grocery business with him, and with William’s network of contacts from his time in the royal household, the business boomed.

The store is famous for its ready-to-eat dishes which are decidedly at the luxury end of the spectrum, such as those that enhance one’s day at Ascot, Wimbledon, or Henley. The store also prides itself on its ‘gastronomic firsts’, and a notable example occurred as the nineteenth century turned to the twentieth. In 1901 Fortnum & Mason sold the first Heinz baked beans in England. Perhaps the exotic American canned beans also fitted into the luxury almost-ready to eat category too.

Fortnum & Mason goods have travelled all over the world with wealthy tourists, intrepid explorers, and even army victuallers. When Queen Victoria heard Florence Nightingale’s stories of the terrible conditions in the Crimea, she ordered quantities of Fortnum & Mason’s concentrated beef tea be sent to the front.

Fortnum & Mason’s elegant picnic take-away (or take-out, if you prefer) has inspired today’s choice of recipe. From a much-used and annotated little book called ‘High Class Cookery’ published in London in 1893 by the National Training School for Cookery (located just down the road from her house in Buckingham Palace Road), I give you the recipe for Birds’ Nests. The plebs would call them Scotch Eggs. The plebs of course would substitute hens’eggs.

Birds’ Nests.
Ingredients: Six Eggs (Plovers’ are the best)
Half a pound of Sausages, or Quenelle Meat.
Egg and Bread-crumbs.
Boil six eggs quite hard, take them out of the shell carefully, and when quite cold, mask them all over with quenelle or sausage meat, egg and breadcrumb them and fry them a nice brown. Take them out of the fat, cut them in half with a sharp knife, stand them up on the narrow end, dish them up with tomato sauce around.

The U.S.Naval Ration of 1794 and beyond was the topic on this day last year.

“It might have been Fortanon. It could have been Fortyahan. It hovered for years between Fortnam and Fortnane. It wasn't until 1707 that it settled down into Fortnum, collected its Mason and became the sweetest sound in the English language for those countless perceptive thousands who know that life can be sustained by bread and water, but it is given a sharp, upward boost by the more imaginative combination of caviar and champagne”
From booklet distributed to patrons, The Delectable History of Fortnum & Mason.

In my Colonial ignorance, I'd always thought Scotch Eggs were made with pureed fish (cod, I suppose) instead of sausage meat. Is this a variation?

Hi Nene - as usual, you have given me something new (or perhaps old) to ponder on. Scotch Eggs - as in hard boiled eggs wrapped in sausage meat, crumbed and fried or baked are an English picnic standby. I have never heard of them with fish. I have no idea how the name arose, but am now so intrigued I will have to look into it. Any lurking readers out there have a clue?

I've always loved Fortnum and Mason products, (jams and teas in particular) but never knew the history of the Royal Appointment. Thanks for a fascinating look back!

Enjoyed the history of F&M had tea there once, but haven't been to London for a long time (no reason now Sam has deserted it for SF). Who would have thought that the humble Heinz beans had such a royal start!

Hello chrisb - the reason is tea at Fortnum & Mason's, silly!

Didn't Gary Rhodes do a Scotch egg with fish? I'm fairly sure I saw him create one on television in such fashion, which I thought was pretty disgusting sounding. I must admit the sausage-egg combo sounds like a recipe for indigestion! Does the 'Scotch egg' pre-date the current Scottish obession with fried food-stuffs like Mars Bars? (Americans have no room to talk, btw. I have recently discovered a new fair-food horror - deep fried Oreo cookies!)

I dont know about the Gary Rhodes recipe, but it doesnt appeal. Mrs Beeton has a recipe for Scotch Eggs, so it is certainly mid-19th century. I think I may do an "Egg Week" for Easter, so I'll include it there. Keep those ideas flowing in, and if you have a favourite historic egg story or recipe, let me know.
Janet