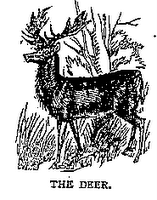 Samuel Pepys’ diary gives us our second story for the week. On this day in 1660, he wrote:

“I dined at my house in Seething lane. Thence to my Lord about business; and being in talk, in comes one with half a Bucke from Hinchingbrooke, and it smelling a little strong, my Lord did give it to me, though it was as good as any could be. I did carry it to my mother to dispose of as she pleased.”

A smelly piece of meat seems a strange gift today, but in the days before refrigeration it was common to share out meaty largesse such as this amongst one’s friends – and in spite of quick distribution it would get high pretty quickly in July.

Two days later Sam happened to call at his parent’s home, where he finds his own wife and several guests dining on a venison pasty made from that self-same Bucke.
It is to be hoped the taint was not obvious. Perhaps the family cook knew of this method, from Hannah Wooley’s “Gentlewoman’s Companion … “ (1673):

Venison how to recover when tainted.
Take a clean cloth and wrap your Venison therin, then bury it in the Earth one whole night, and it will take away the ill scent or favour.

Of course, there were recommended ways of keeping it sweet for the longer term, and another of Hannah’s books, “The Cook’s Guide … “ (1664) tells us how:

To keep Venison nine or ten months good and sweet.
Take a haunch of Venison and bore holes in it, then stop in seasoning into it as you
do parsley into beef in the inside of it if it be red Deer, take pepper, nutmeg, cloves, mace and salt; if it be fallow deer then only pepper and salt; when it is thus seasoned dip it in white wine vineger, and put it in an earthen pot with the salt side down and having first sprinkled good store of spice into the pot; if it be fallow deer three pound of butter will serve, but if red deer then four pounds; when you put it into the oven lay an earthen dish over it, and paste it close up that no air can get out nor in, so let it stand six or seven hours in a very hot oven; when it is baked take off the cover and put in a trencher and a stone upon it to keep the meat down in the liquor; fill up the pot with melted butter and so keep it, serve it to the table in slices with mustard and sugar.

Wine is the intellectual part of a meal, meats are merely the material part. Alexandre Dumas.
Posted by The Old Foodie at 5:43 AM

And THAT, dear friend, is why I don't pine for the "good old days". That and no washing machines, of course. And toilet paper...don't want to forget toilet paper. And air conditioning. Woo boy! We need that today!

Anyway, good post O.F. You make me appreciate the ease of cooking today.

And today we get anxious if leftovers are still lurking in the fridge after 3 days! I agree that there was a lot of bad about the good old days. Hot running water, toilet paper - yes! No servants though.