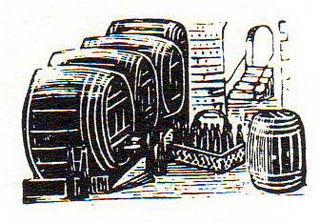 Rather puffed up with pride at his improved station life, Samuel Pepys set Mr. Hudson the wine cooper to work in his wine cellar on this day in 1665.

… at this time I have two tierces of claret – two quarter-casks of canary, and a smaller of sack – a vessel of tent, another of Malaga, and another of white wine, all in my wine-cellar together – which I believe none of my friends of my name now alive ever had of his own at one time.

So how good a cellar was that, exactly?

First the quantity: a ‘tierce’ is a third of a pipe, or half a firkin, or two-thirds of a hogshead - in other words, in today’s measure about 35 imperial gallons (159 litres) or 42 US gallons.

Now the contents: ‘Tent’ comes from the Spanish tinto, and meant wine of a deep red colour, usually from Spain. So if ‘Tent’ was red, what was ‘Claret’? Originally the word came from the French clairet, meaning clear or light, and it meant a wine of a colour somewhere between ‘red’ and ‘white’ (or ‘yellow’) wine, although by the time of Sam Pepys, it was already being used to refer mainly to red wine. ‘Canary’ was a sweet white wine produced around Tenerife, and Malaga, or Malago wine was a sweet fortified wine from Andalusia, usually made from pedro ximinez grapes. Finally, ‘Sack’ was also a white, usually fortified wine from Spain or the Canary Islands – in other words, sherry.

Was the wine used in cooking in the Pepys’ household? Quite probably, as it was a common practice as these recipes from Robert May’s ‘Accomplish’t Cook … ‘ (1660) show:

Sauce for a Duck.
Onions slic’t, and carrots cut square like dice, boild in white wine, strong broth, some gravy, minced parsley, savory chopped, mace, and butter; being well stewed together it will serve for divers wilde fowls, but most proper for water fowl.

To make a Pudding of Wine in guts.
Slice the crumbs of two manchets, and take half a pint of wine, and some sugar, the wine must be scalded; then take eight eggs, and beat them with rose-water, put to them sliced dates, marrow, and nutmeg, mix all together, and fill the guts to boil.

To make a Sack Cream.
Take a quart of cream and set it on the fire, when it is boiled drop in six or eight drops of sack, and stir it well, to keep it from curdling, then season it with sugar and strong water.

On Monday: Emu egg for breakfast.

“But i’ faith, you have drunk too much canaries and that's a marvellous searching wine, and it perfumes the blood ere one can say: What's this?". Shakespeare, Henry IV, part II, Act 2, Scent 4.