The poet of bran and pumpkins. 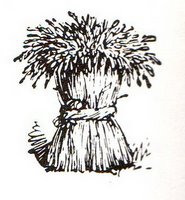 Being a failed minister of religion is probably not a bad start for becoming a nutrition guru – both do require deep belief and evangelical zeal – and such was the career path of Sylvester Graham, born on this day in 1795. Although he was dead by the time he was 58 years old he developed a huge following (of “Grahamites”) during his lifetime, and left the enduring legacy of his name in “Graham flour” and “Graham crackers”.

His early theory of plain food for a long life developed into a hair-shirt type of nutrition doctrine that spun off to include advice about the value of cold bathing, loose clothing, and sexual restraint. Absolutely no condiments or stimulants of any kind were to accompany the strictly vegetarian fare, which was to be enjoyed in three instalments six hours apart, with no between meal snacks. Meat was the enemy, and bread the saviour – home-made bread that is, because, he said, bakers’ bread was made with over-refined and adulterated flour.

As is the lot of gurus throughout history, he came in for a lot of ridicule, and with newspapers called him “Dr.Bran”, and “the philosopher of sawdust pudding”, and Emerson called him “the poet of bran and pumpkins”, a recipe for wholesome pumpkin bread seemed appropriate initially.

Sweet-potato bread won, in the end. It is too deliciously subversive to resist, if you believe its old reputation for being an aphrodisiac. I’m also going to recommend it be eaten hot, straight from the oven, and not wait his recommended 12 hours before eating. So come back and haunt me, Sylvester.

RAISED SWEET-POTATO BREAD.
Boil, peel, and mash sweet potatoes enough to yield a quart of pulp after they are mashed; to a quart of mashed sweet potatoes add a pint of milk in which has been dissolved half an ounce of compressed yeast, and two teaspoonfuls each of salt and sugar, together with a pint of boiling water, and just enough flour to make a thick batter; put this batter in a warm place near the fire to rise until it is double its first quantity, keeping it covered with a thick towel folded several times. When the batter has risen to twice its original bulk, mix with it enough more flour to make a soft dough; knead it for five minutes, then put it into three buttered iron pans, filling each half full, and again cover it, and let it rise to double its size; then bake the loaves in a moderate oven until they are quite done. Use the bread hot or cold.

There are probably few people in civilized life, who were the question put to them directly - would not say, that they consider bread one of the most, if not the most important article of diet which enters into the food of man. And yet there is, in reality, almost a total and universal carelessness about the character of bread. Thousands in civic life will, for years, and perhaps as long as they live, eat the most miserable trash that can be imagined, the the form of bread, and never seem to think that they can possibly have anything better, nor even that it is an evil to eat such stuff as they do. Sylvester Graham; “Treatise on Bread and Bread Making” 1837