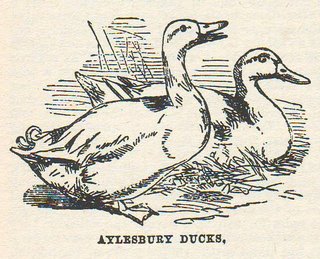 Our final day of “Duck and Dessert” is going to be aboard ship. On this day in 1913 the Cunard ship R.M.S “Franconia” was at sea, probably on its usual route between Liverpool and Boston, and the dinner menu was:

The chef did not feel it necessary to specify how the duck was prepared but had ensured that it was the very best type of duck that England could offer – the Aylesbury, named for the town in Buckinghamshire where it originated about two hundred years ago. At one time flocks of the ducks were “walked” the 40 miles to London to market, their feet protected by a coating of tar and sawdust, and accommodation being provided in special yards at inns along the way.

We can be certain that the chef aboard the “Franconia” was male, but make no apologies for offering this rather delicious-sounding recipe from “The Woman’s Book: contains everything a woman ought to know” (1911).

Roast Duck.
Fill the duck with apples peeled and cut in quarters and a few French Plums* which have been soaked and stoned. Roast in the same way as a fowl. It will take from three-quarters of an hour to one hour. Serve with brown gravy and salad.

And from the same book, something we could also call Cocoanut Macaroons:

Cocoanut Biscuits.
2 oz Dessicated Coconut; 2 oz. Castor Sugar; 1 tea-spoonful flour; 1 white of egg; Wafer paper.
Chop the cocoanut a little more finely if necessary, and mix it in a basin with the other dry ingredients. Whip the white of egg to a stiff froth, and bind all together with this. Put small squares of wafer paper on a dry baking-tin, arrange a tea-spoonful of the mixture on each, and bake in a slow oven for half an hour, or until the biscuits are firm and of a pale brown colour. Cool them in a sieve, breaking off the wafer paper which projects beyond the edges. These biscuits should be kept in paper in an air-tight tin box.

The white Aylesbury duck is, and deservedly, a universal favourite. Its snowy plumage and comfortable comportment make it a credit to the poultry-yard, while its broad and deep breast, and its ample back, convey the assurance that your satisfaction will not cease at its death. Isabella Beeton, 1861.