The End of the Auk. 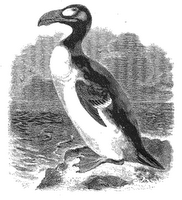 Three humans managed to murder the last pair of Greak Auks and their single egg on this day in 1844, on the little island of Eldey off the coast of Iceland. The big, flightless, penguin-like birds from the Northern Atlantic were so easy to catch and kill, it is a wonder they did not succumb earlier to their human predators.

Auks, like many other swimming and diving birds, provided fresh meat for small subsistence communities and roving fishermen for centuries, but food was not the motive in the final slaughter. After they were no longer desirable as food, they were hunted relentlessly for their feathers, and finally, at the cusp of their extinction in the early nineteenth century, their rarity made them valuable to collectors of natural history specimens – an ironic fate of the last little family of Great Auks on earth.

The birds then, were already extinct by the time Peter Lund Simmonds wrote his fascinating book “The Curiosities of Food; or the Dainties and Delicacies of Different Nations Obtained from the ANIMAL KINGDOM” in 1859. The Great Auk is not mentioned, but other “NATATORES” are, with suggestions as to how to cook them:

The brent goose (Anser torquatus) is excellent eating, and its flesh is free from fishy taste. Then follow the little auk or rotge (Alca alle), the dovekey, or black guillemot (Uria grille),the loon, or thick-billed guillemot (Uria Brunnichii). The first two are better baked with a crust, and the last makes, with spices and wine, a soup but little inferior to that of English hare.

There are unashamedly gleeful descriptions of the hunt too. One “correspondent’ had a “pleasant day” gathering penguin eggs on Tristan d’Acuna:

Fancy what work, to stand amid hundreds of the birds, all screaming round you, so as almost to deafen you, tumbling them here and there, and picking up their eggs as fast as you can gather them! It is really amusing sport. I must remind you the kicking them over with our soft moccasins (shoes) does not hurt them in the least, and the next day they will have just as many eggs.

We need a soothing dish to follow such a story, perhaps one from hens’ eggs – free range of course - such as this one from Alexis Soyer’s “Modern Housewife” (1853).

Eggs with Burnt Butter.
Put into a frying-pan two ounces of butter, which melt; as soon as it is on the poit of browning, put in the eggs, which have been previously broken in a basin, and seasoned with pepper and salt; when well set, serve, with a teaspoon of vinegar over the eggs.

Tomorrow: The Fourth, of Course.

It might seem that an egg which has succeeded in being fresh has done all that can reasonably be expected of it. Henry James.
Posted by The Old Foodie at 6:03 AM