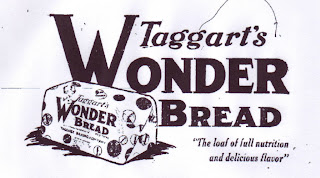 Several American newspapers carried advertisements for a new product on this day in 1921.

So now the mystery we will end,
And to every home a message send,
A message that brings joy to you,
To mother, father and grandma, too,
To Mary, Betty, Jack and e
For all the family will learn to know,
The meaning of this wonder word
That everyone has read and heard.
A new delight with every bite,
Both morning, noon and every night,
For Mary knows, you know her well,
And many a truth she's had to tell,
And now the best she ever knew,
She gives in this new loaf to you,
For as the bakery leads, they're still ahead,
And now it's
Delicious WONDER BREAD

your order for WONDER BREAD, the new wrapped loaf, with your grocer Monday. He will have it beginning Tuesday, May 24th

The Staff of Life it isn't.

Is it unethical, to despise something you have never actually tasted? I confess to never having eaten Wonder Bread on any of my several short trips to the , but nevertheless I feel I know it from its clones around the world.

By way of contrast, William Ellis in his Country Housewife’s Companion (1750) described how a Cheshire servant made her bread:

A Servant Maid's Account of her making leavened Bread.
She told me in November 1746, that in the part of Cheshire where she had lived they eat barley-bread, or bread made with half rye and half wheat-meal, which they there call mobbum bread; but in other parts of Cheshire, towards Manchester, she says, they eat sour cake, that is to say, oatcake-bread. Her way to make barley or mobbum bread was to save a salted piece of leavened dough against next baking, and then crumble it into warm water, with which she mixed her flower, and made it just into a dough over night, and let it lie till next morning, when she kneaded it for good. She said, they make use of no yeast, unless they think the leaven not strong enough to ferment the dough of itself, - but to make leaven the first time, knead a piece of dough with salt, as long as it will take up any, then hang it up, or leave it covered in salt; and to make it better, you may add a little yeast to the dough, or instead thereof some grounds of ale, or an egg. The staler the leaven the closer will be the bread, and the sooner sour, and if the dough is not well kneaded, it will be streaky.

Mobbum Bread sounds pretty good. Unless you would miss those exthoxylated mono and diglycerides of course.

"...the best poet is the man who delivers our daily bread: the local baker...." Pablo Neruda

I've lived in the US for 36 years and after my first experience of Wonderbread have never, if an alternative is available, purchased either it, or one of its generic brothers or sisters. It is known "en famille" as "concertina bread", since you can hold a plastic-wrapped loaf at either end and push it in and out, with the same physical result - other than sound - and no more resistance than you would expect from a concertina. An overriding taste, of it and of the majority of American breads - even speciality and organic ones - is of sugar (in organic breads the sweetening agent is frequently honey). The basic flour, water, yeast & salt loaf is almost unknown on this continent.

More on the development and debasement of the American loaf - and other foodstuffs - can, as I recall, be found in "The Taste of America" by John & Karen Hess (NY, Grossman, 1977) - still a useful book, despite its age, particularly for for its historical and polemical chapters. You probably have a copy. It was issued in paperback by Penguin. Roger

Hello Roger. What amazes me is that all these "modifications" of bread across the last century have been called "improvements". What was there to improve in the first place?
I do have a copy of the Hess's book, but have not opened it for a very long time. A classic, and definitely worth re-reading.

What is more disturbing is that almost all US bread - wholemeal, organic, "Italian", whatever ... has virtually the same soft, squishy texture as Wonderbread. There is just one market I know here in Columbia, SC - an urban area of more than 150,000 - that sells a variety of good, crusty, firm-textured, Italian-inspired bread. They used to do good baguettes and batards as well. The batards are gone and the baguettes, which being decently made went stale and dry in a matter of hours, have been replaced with a heavier, softer, longer-lasting, more market-friendly type. Just be thankful that the good Italian bread is still, for now, around - yes? Roger

While I don't have specific evidence to back this up, I believe that Wonder Bread was really directed at children, and was part of an effort to create visually appealing products that children would request. The "red, yellow and blue balloons" printed on the package were even mentioned as part of the advertising, telling children to look for the balloons. In effect, it falls into the category of heavily marketed sugared cereals, packaged cupcakes, Twinkies and the like. Fortunately, there is a movement towards whole grain and artisanal breads in the US, but the marketers continue to plug away as well.

The best thing about Wonder Bread (and similar "breads") is that it makes great bread pills for your sick dolls.

Henry Miller wrote an essay on American white bread called "The Staff of Life" that is quite rude and quite true -- well worth reading.