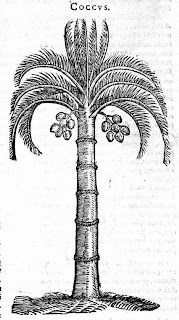 We are voyaging with Joseph Banks aboard the Endeavour again today. In May 1769 the ship was lying at anchor at ‘King George’s Island’, and Banks made a new discovery on this day:

“We have now got the Indian name of the Island, Otahite, so therefore for the future I shall call it.”

We left Banks a few days ago purchasing breadfruit. On this day, still ‘in distress for nescessaries’, he was negotiating for that other South Sea staple – coconuts.

“Cocoa nuts have been for some days rather scarce, we are therefore obligd for the first time to bring out our nails. Last night our smallest size about 4 inches long were offerd for 20 Cocoa nutts, accordingly this morn several came with that number so that we had plenty of them. Smaller lots as well as bread fruit sold as usual for beads. Soon after breakfast Came Oborea, Obadee and Tupia bringing a hog and some breadfruit; they stayd with us till night then took away their canoe and promisd to return in 3 days. We had to day 350 Cocoa nuts and more bread fruit than we would buy so that we aproach our former plenty.”

The word ‘coconut’ comes from the Spanish and Portuguese coco, referring to the grin or grimace suggested by the three holes at the base of the shell. Perhaps the early Europeans who ‘discovered’ it did not immediately appreciate its value or they may have given it a more serious name. The late Alan Davidson said of it that it is “the fruit of Cocos nucifera, the most useful tree in the world. It provides not only food and drink, but also vessels to serve them in and fuel to cook them, as well as textile fibre, thatching and basket materials, timber, medicines, chemicals, and many other valuable or useful products.’

As far as food goes, the coconut tree provides a number of completely different products. Coconut juice is the ‘water’ inside the shell, available as a refreshing drink without any further ado (so long as you have a machete), and which is not to be confused with coconut milk and cream (made by infusing and pounding the flesh in water). There is also coconut oil, coconut sugar (syrup and ‘honey’), a version of the alcoholic drink ‘toddy’, and of course the hard white flesh itself.

Dried and dessicated coconut is what we often reach for when we see a recipe containing coconut – it is often too much trouble, even if the whole coconuts are available, to chip and chop out the flesh from the shell. I don’t know when these products became widely available, but in many instances they are an abomination compared with the real thing. Often they are ‘sweetened’ – as if coconut was not already sweet enough! and with a list of additives that are so scary they have to be disguised with code numbers.

We can learn a thing or two from our Victorian ancestors. They used the real thing when it came to coconut. I know, I know - they had kitchen hacks to do the hard hacking, and if the dried sweetened additive-laden version had been available they would surely have used it …. Nevertheless these recipes are very worthy. Who said Victorian food was stodgy and unimaginative?

Cream Cocoa Nut Pudding
Grate a large cocoa nut fine. Stir together a quarter of a pound of butter, and a quarter of a pound of loaf sugar till quite light. Beat six eggs and mix them gradually with one pint of cream, or cream and milk mixed together; stir all together well. Put the mixture into a dish and bake it. Serve hot or cold with sifted sugar: this pudding may be baked in puff paste.
[The English cookery book, receipts collected by a committee of ladies, and ed. by J. H. Walsh 1859]

Cocoa-nut Macaroons.
Take a fresh cocoa-nut, grate it finely, and allow half a found of finely-sifted sugar and the whites of four eggs beaten to a firm froth to every quarter of a pound of cocoa-nut. Mix the ingredients thoroughly. Drop little balls of the paste upon a well-battered tin about two inches apart from one another. Bake in a moderate oven. When the macaroons are lightly browned all over they will be ready.
[Cassell’s Dictionary of Cookery, c1870]

Cocoa-Nut Soup.
Grate very finely the white of a fresh cocoa-nut, and simmer it gently for an hour in some good stock, allowing a quarter of a pound of cocoa-nut for every half gallon of stock. Strain the liquid, and thicken it with some ground rice; half a pound of ground rice will be enough for this quantity. Season it with a little salt and cayenne, and a small tea-spoonful of mace. Just before serving, draw it from the fire, and add a cupful of thick cream.
[Cassell’s Dictionary of Cookery, c1870]

Methinks this soup might be a worthy partner to the chocolate soup featured in a previous story. Perhaps both, poured artistically into the bowl together. Chocolate-Coconut Soup! Now there’s a cutting-edge, modern-sounding, innovative idea. Feel free to use it.

We learned about High Tea and Low Tea.

Half of the receipts in our cookbooks are mere murder to such constitutions and stomachs as we grow here......in America, owing to our brighter skies and more fervid climate, we have developed an acute, nervous delicacy of temperament far more akin to that of France than of England. Catherine Beecher, 1846.

I am very thankful to that person who brought us coco nuts. I love the taste of coco nut. I make my own müsli once a week and I put coconut flakes in müsli too (among other things).

Hello Karin - I love coconut too, and I make my own toasted granola - I have done for years, and of course I put coconut in it!
Janet