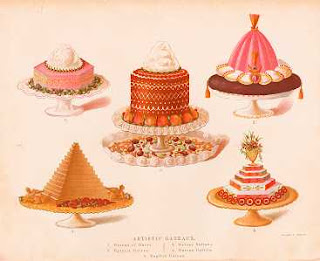 On this day in 1876 the Centennial Fair opened in Philadelphia. It was the first World Fair in the USA, and as its name suggests, it was held to celebrate the one hundredth anniversary of the Declaration of Independence. And what is an anniversary without a cake?

There are lots of emphatic, but completely un-documented references to a 'Centennial Cake' produced especially for this event, a cake which the same emphatic references say is the ancestor of Shoo-Fly pie. It might seem strange to suggest a cake as an ancestor to a pie, but this is from a country that clearly confuses the two as shown by the existence of the famous Boston Cream Pie, which is unequivocally a cake. I await eagerly but with some trepidation for my American friends to chastise, ridicule, inform, enlighten or otherwise engage with me in the process of enlightenment on this issue.

In the search for the original Centennial Cake, the most likely candidates would surely come from cookbooks of the same era. There was one such, put together by the good ladies of the First Congregational Church in Marysville, Ohio in 1876 also in celebration of the Centennial of the country and called The Centennial Buckeye Cook Book. I may not know a Buckeye when I see one, but I do know that Ohio is across the border from Pennsyvania, which I also happen to know is the location of Philadelphia (my geographical knowledge has grown by leaps and bounds since starting this blog). This book therefore seemed a good place to start, and it does indeed have a Centennial Cake recipe. This is it, from the 1877 edition:

Centennial Cake.
Two cups pulverized sugar, one of butter rubbed to a light cream with the sugar, one of sweet milk, three of flour, half cup corn starch, four eggs, half pound chopped raisins, half a grated nutmeg and two tea-spoons baking-powder.

Which sounds like a fairly unexciting cake for such an special event, does it not?

In view of the cake/pie confusion alluded to above, I make no apologies for including this next recipe, which is unequivocally for a pie, from The Times Cook Book of 1905

It does not, however, sound at all like shoo-fly pie, does it?

I think I need help with this. Those of you “Over There” please consider sending in your own Centennial Cake recipes in, and we will try to make sense of it all. If anyone has the mythical ‘original’ recipe from the Centennial Fair, I will be most pleased.

Any fruit with that?

Is a tomato a fruit or a vegetable?

Americans can eat garbage, provided you sprinkle it liberally with ketchup, mustard, chili sauce, Tabasco sauce, cayenne pepper, or any other condiment which destroys the original flavor of the dish. Henry Miller, American writer (1891-1980)
Posted by The Old Foodie at 5:54 AM

This may not solve the mystery of pie/cake completely, but here is a reference to "Washington Pie" from "The American History Cookbook" by Mark H. Zanger: "Washington Pie is a cake, and became the Washington's Birthday cake that survived the longest ... This layer cake may have been called "pie" because it was an early layer cake with thin layers that could be baked in pie pans." Interestingly, the book states that the earlier Washington Cakes were pound cakes with raisins, which sounds a bit like your recipe for Centennial Cake!

Hello t.w. Another piece in the puzzle!. I am not sure about the logic of calling a cake a pie just because it was cooked in a pie pan, but logic is not my specialty. I await other comments with great eagerness.

I may not have an exact answer, but if the period articles on the Centennial Cake make reference to shoo-fly pie (an old-fashioned southern favorite), there is a thing called shoo-fly cake, a recipe that comes from the Pennsylvania Dutch (who are not really Dutch but German, more properly they are called Deitsch but the word was corrupted). They are German immigrants who settled in Pennsylvania prior to 1800.

The recipe is thus:

I don't know which came first, shoo-fly pie (which is an actual pie with a crust and a "wet" molasses filling) or the cake, but the time period and location make it possible for this to be a candidate for the Centennial Cake.

I enjoy your blog every day! I must say that every old cookbook I have ever read takes up the thorny issue of Boston Cream Pie (I happen to be from that great city) and there are so many variations of the story that I wouldn't dare quote one as true.
But if pudding can mean any one of a number of things, all generally delicious, why not pie?

I came upon your blog today while looking for info on lobsters, and oddly enough many, many years ago I found a recipe for Centennial Marble cake. I wish I still had the originally worded recipe, I do however, have a version I put together with modern measurements, and I used to bake it often. I'm originally from Philadelphia, by the way.
Centennial Marble cake
Light portion:
2 c flour
1 1/2 c sugar
1/2 c butter
1/2 c milk
4 egg whites
1/2 tsp. cream of tartar
1/4 tsp baking soda
dash vanilla or nutmeg

For the light portion, sift the flour and baking soda, cream the butter and sugar, add vanilla or nutmeg. Blend the creamed mixture with the flour, alternating with milk. Beat the egg whites with the cream of tartar then fold into the batter.
Follow similar prodcedure for the dark batter, then drop by alternating spoonfuls into a greased and floured tube pan, swirling with a knife to blend. bake 350 degrees for @ 1 hour.

By the way, anyone happen to know when lobster stopped being a poor man's dish and became a luxury item?
Grazhina
http://victoriandecorating.blogspot.com/

I grew up in NE Ohio, sort of ground zero for dessert experimentation by the Amish (distantly related to those geniuses of pastry, the Austrians). I know that at one time any dish with anything remotely like a crust was called a pie - a custom still living on in the form of chicken pot pie, meat pies, etc. Depending on what kind of cake you use, and the proportions of cake to filling, it could be argued that Boston Cream Pie is a pie.

Of course these are the same people who called pies, puddings.

I dunno. But now I'm hungry.

It's a wee bit off topic - cake to lobster - but I can tell you that in the early days of American colonization, lobsters were incredibly plentiful. So plentiful, in fact, and easy to catch that they didn't cost very much and were part of the Atlantic coast poor man's staple diet. As is often the case, a plentiful and cheap commodity is disdained by the wealthy. However, by the mid 1800's, commercial fisheries on the Atlantic coast were in full swing and the rise of railroads made it possible for lobsters to be shipped far inland and lobsters became a prized delicacy.

Hello everyone - sorry to be late in responding to your interesting comments, things have been a big hectic round here. It seems that there are many variations of Centennial Cake, and clearly some do have a relationship with shoo-fly pie. I love the marbled version grazhina!