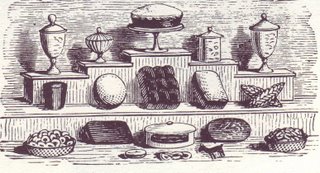 The infamous Maquis de Sade, with the help of his trusty valet, Latour, were in Marseilles on this day in 1772, ostensibly to collect on some debts, but the real motive being to throw a private party.

The planned fun backfired in the worst possible way for both the guests (who became seriously compromised and/or seriously ill) and the Maquis who was arrested and charged with poisoning.

"Spanish Fly" is a green beetle containing cantharides which produce local irritation as they pass through (and out) of body tissues - a local irritation which needs "scratching", hence its reputation for provoking lust. Sweetmeats laced with it were a popular novely in the 17th and 18th centuries, and went by a variety of names: pilles galants, pastilles de Richelieu, pastilles de serail (seraglio). It has, apparently, a bitter taste, so it seems more likely to this writer that the more strongly flavoured aniseed comfits were the vehicle.

Comfits without this special additive have a much longer and more noble history. They are essentially sugar-coated seeds such as caraway, aniseed, and coriander, and were often brightly coloured.

Here is a basic recipe from John Nott's "The cooks and confectioners dictionary: or, the accomplish'd housewives companion ... " (1724)

Having a deep Brass-pan with Handles, tinn'd over, with a Slice and Ladle of the same Metal, set it over a Chafing-dish of Coals; put into the Pan three Pound of double refin'd Sugar in fine powder, with a Pint of Rosewater or Spring-water, stirring it till it is moistened and suffering it to boil; then take half a Pound of Carraway-seeds well cleansed and dry'd; then from your Ladle let the Sugar or Syrup drop upon the Seeds, continually moving or shaking the Bason in which they are; between every Coat dry and rub them as well as may be; and when they have taken up the quantity of Sugar or Syrup, and by Motion or Shaking, are rolled into From, then dry them before the Fire, or in an Oven.

Post-Script: Accomplish't housewives may prefer the more detailed instructions found in Hannah Wolley's "The queen-like closet: or, rich cabinet stored with all manner of rare receipts for preserving, candying, & cookery. Very pleasant and beneficial to all ingenious persons of the female sex" (1670), which is on the Companion site HERE.

Candy is dandy, but liquor is quicker. Ogden Nash.
Posted by The Old Foodie at 7:12 AM

(thankyou for your site, it's great!)

These "bon bons" remind me of those indian sweets, usually found on the bar in Indian restaurants. They are stored in a large bowl and a you just scoop a handful out and throw them down the throat.

I have tried very hard to like these things over the years, but with no luck unfortunatley!

Do you know the history of these aniseedy indian hundreds and thousands?

Hello Viveka, thanks for your comments: I dont know the history of those multi-coloured Indian sweeties, but it would be interesting to find out if they developed independently, or were an Anglo / colonial development. So many mysteries, so little time ....