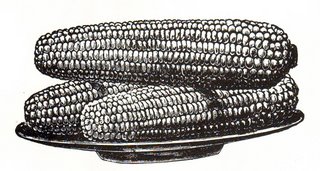 When Harriet Martineau wrote of sweet corn “The greatest drawback is the way in which it is necessary to eat it … It looks awkward enough: but what is to be done? Surrendering such a vegetable from considerations of grace is not to be thought of”, she was writing about a delight sampled by few of her countrymen and women.

The radical social scientist, political commentator, and writer was born on this day in 1802 in England - her French name indicating her Huguenot origins – and must have been introduced to sweet corn during her couple of years in America in the 1830’s.

Harriet was an early feminist who apparently chose independence over marriage, and then, when the family circumstances changed radically, had to earn her own living, which proved a powerful stimulus to her writing career. She made no gender specific comments about the eating of corn, unlike the mysterious Charles Day (who was he?) in 1844:

It is not elegant to gnaw Indian corn. The kernels should be scored with a knife, scraped off into the plate, and then eaten with a fork. Ladies should be particularly careful how they manage so ticklish a dainty, lest the exhibition rub off a little desirable romance.

I like to think that as a writer she would have had some interest in the word “corn”, which in America was “maize”, but in her native England meant “grain” (especially wheat), and by extension anything grain-like or “granular” (think of pepper-corns). Salting meat is “corning” it because of the use of grains of salt which often then appear on the outside (which is why it is also called “powdering”). Would she have had fun with the two countries already divided by their common language?

Cassell’s ‘Dictionary of Cookery’ (c 1870) regretted its rarity in England:

Maize, Boiled.
It is a subject of regret that this vegetable, so highly esteemed in America, is not to be obtained in this country, at least not in a fresh state. It can, however, be procured preserved in tins, and though in that state much of its freshness is lost, it will be much appreciated by those housekeepers who study variety. Strip the stalks of the fibre and the outside covering, boil from twenty to twenty-five minutes; drain, place a piece of toast at the bottom of the dish, and pour rich melted butter over the ears. Maize is in America simply boiled, and served with a piece of fresh butter. One ear of grain is sufficient for one person.

Sex is good, but not as good as fresh, sweet corn. Garrison Keillor.

APOLOGY! The "comments" link accidentally became disabled on this post (TOF blames cyberspace gremlins), so if you have a burning desire to comment on this particular post, please email me vial the link in the sidebar.
Posted by The Old Foodie at 7:38 AM