The Dinner of the Three Emperors. 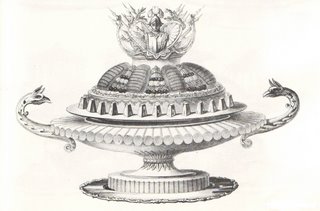 In 1867, Paris hosted a Universal Exposition – partly to show the British they too could do it – and the royals and important dignitaries of the world were invited, so that in the end, “Paris was bloated with Majesties and Highnesses”.

Three of the important majesties attended a dinner on this day at the Café Anglais (which sadly no longer exists): Tsar Alexander II, the Tsarevich (the future Alexander III), and Kaiser Wilhelm I of Prussia (accompanied by Prince Otto von Bismarck).

No possible cause for complaint there, you would think. There is, however, a persisting rumour that the Tsar did complain about the lack of foie gras – he was in France, after all. The quick-thinking chef supposedly said "Sire, in Gastronomie Française it is not the custom to eat foie gras in the month of June. If you will but wait until October, you will have no cause for regret."

Most of the dishes on the menu are from the classic French repertoire. The only eponymous dish mentioned – the Potage Fontanges, a soup of peas and sorrel - was named after Mlle. de Fontanges, Marie Angelique de Scorailles, one of the mistresses of Louis XIV. The tradition of naming dishes after royal mistresses seems to have died out, more’s the pity, as methinks it adds an extra flavour to the dish.

Potage Fontanges.
Prepare 6 cups (1 ½ litres) of Purée of fresh pea soup, dilute it with a little consommé and add to it 4 tablespoons of a chiffonade of sorrel cooked in butter until soft, and some chervil leaves.
This soup is sometimes thickened with a liaison of yolks and cream.
Tomorrow: A fine Gooseberry Tart.

It is the intention of The Old Foodie to source contemporary recipes for each of these dishes over the next week or two and post them on the Companion site, in case an enthusiastic reader wishes to recreate the meal. In which case, The Old Foodie expects an invitation to herself would be fair reward. Will someone please organise the wine?

The only cooks in the civilized world are French cooks. . . . Other nations understand food in general; the French alone understand cooking, because all their qualities - promptitude, decision, tact - are employed in the art. No foreigner can make a good white sauce. 'La Vie parisienne', 1853. Louis Victor Nestor Roqueplan.

Where does one find the references for historical articles like this? I ask because I looked up the wine list for this famous dinner last year and the sherry and madeira were different in each source I found.

Hello 2grandcru - I know that there are several minor variations given for this menu. I understand that the original is at the Tour d'Argent in Paris (they have the memorabilia from the Cafe Anglais where this dinner took place) - and one day (hopefully in dec/jan) I am going to check it out for certain - I will make sure I blog about it then.

Hi Janet!
I plan on doing a short post about Adolphe Dugléré tomorrow (June 3rd US time) in honor of his birthday. I will be mentioning "The Dinner of the Three Emperors" and would like to include your link as a resource. I hope you don't mind.

My notes will be cited from a book titled For Epicureans Only by Jean Conil. I should note, there does seem to be a variable in the wine selection in the book. A quick hop to the La Tour d'Argent website did have the historic menu posted but for some reason when I returned to the website to compare, it just kept giving me the history. I even tried to clear my cookies and returned. No go. You might want to give it a try. Let me know if you do as it took me a while to figure out how to navigate the site.

It's good to be home. I need to now check what you've been up to lately. I have a feeling tomorrow's post is going to be late!!!

Hi Louise - lovely! I look forward to reading it. I cant get onto the Tour d'Argent menu either right now.
I just gotta get to Paris for myself and check it out!

I'm so glad I found your blog. I was looking everywhere for a recipe for soup Fontanges coz it sounds really tasty. Now I have somewhere to start from. Thanks heaps!