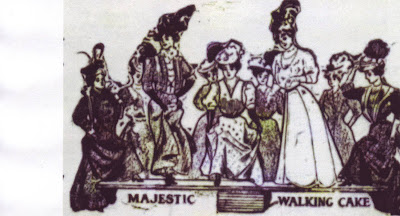 I came across a rather intriguing advertisement recently, in an American newspaper from 1930 (the Lebanon Daily News). The Lebanon Hardware Company were holding a very interesting cooking demonstration:

Do not fail to witness this UNUSUAL EVENT. The cake is 17x17 inches, 5 layers high - Baked right here in our store, in a Majestic operated with a paper smoke pipe. Ten ladies will stand on this monster cake. After being crushed it conies back to its former height, and is served to those present.

It seems that the Majestic Range Air-Tight Oven had been promoted in this way for several decades. An advertisement from 1911 explained (and illustrated) how a large number of ladies (in this case twenty –five!) could stand on one cake – two 12-foot planks were placed upon it, crushing it flat, whereupon ‘in five minutes it will rise to its natural height, when it will be cut and served to all present.’

What sort of cake pops back up to its original size after having twenty-five ladies stand on it? The only other reference to a ‘walking cake’ references a baba – as a cake suitable for folk to eat on the run. A baba does not seem to be the cake in the advertisement. Can any of my enthusiastic informants out there offer any more information?

I don’t think this baba would stand up to the treatment.


Baba with Raisins.
Mix half an ounce of German yeast and four ounces of sifted flour with warm water to a soft dough, and put it near the fire to rise. Rub twelve ounces of butter into twelve ounces of flour, work it into a smooth paste with eight well-beaten eggs, one ounce of powdered sugar, and a little salt. When the paste is ready, and the sponge sufficiently risen, blend them well together and mix in two ounces of finely minced candied citron-peel, two ounces of well-dried currants, and three ounces of stoned raisins. Butter a small mould – fill it about half full, and allow it to rise until it is nearly at the top, when it may be baked at once in a moderate oven.
Cassell’s Dictionary of Cookery, 1870’s.
Posted by The Old Foodie at 5:05 AM

I don't know about the cake, but I'd like to get my hands on the magic oven it was made in!

Janet have you seen this cookbook: http://www.archive.org/details/majesticrangecat00losaiala. It is a copy of cookbook that came with the Majestic range. It is also a catalog. I may try some of the recipes. Judy

Hello Judith - the oven does sound amazing, doesnt it?
Judy: I love the Internet Archive, and use it a lot, but had not looked for any information about the stove there - so many thanks! Maybe fodder for another post?