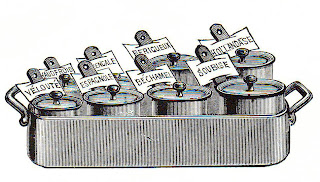 There are lots of options to gild the lily that is your Christmas pudding. For many of us, it is custard, pure and simple. For many of you, it may be ice-cream. For some, it is the ‘traditional’ brandy butter’ (or ‘hard sauce’) that featured in yesterday’s post.

If none of these please or excite you, I give you a selection of pudding sauces from The Times of October 17, 1928.

Brandy Sauce.
Cream together two ounces of butter and two ounces of sugar and add very slowly two tablespoonfuls of brandy. Beat very thoroughly and then add the well-beaten yolks of two eggs and a quarter of a pint of cream or milk. Cook in a double saucepan or over hot water until it thickens, then pour on to the beaten whites of the eggs and serve immediately.

Caramel Brandy Sauce.
This is prepared in the same way, but with brown sugar instead of white.


White Wine Sauce.
Cream together four ounces of butter and the same quantity of fine white sugar. Gradually add three tablespoonfuls of sherry or Madeira, stirring it very carefully. Pile it up in a glass dish and sprinkle it with nutmeg. Keep it in a very cold place until it is to be served.

Rum Syrup.
This is made by simply boiling half a cupful of sugar in a cupful of water for five minutes, and then adding a quarter of a cupful of rum. This sauce is excellent served with omelettes and soufflés.


Apricot Sauce.
Put three tablespoonfuls of apricot jam into a saucepan with half a cupful of water. Boil, remove from the stove, and add a wineglass of sherry. Rub through a sieve or strainer and bring once more to boiling point. Add a dessertspoonful of cornflour mixed to a paste with cold water. Stir until the sauce thickens.


Coffee Sauce.
Boil half a pint of black coffee with two ounces of loaf sugar to make a syrup. Then add a dessertspoonful of cornflour, mixed as before with cold water. Stir until the sauce thickens and cook. Strain and serve.

Always serve too much hot fudge sauce on hot fudge sundaes. It makes people overjoyed, and puts them in your debt.
Judith Olney.
Posted by The Old Foodie at 9:06 AM

Janet, It may be just my imagination but fruit cake and plum pudding seem to have the same ingredients, one is steamed and the other is baked, both are soaked in rum or spirits after the cooking to finish them. I've even seen fruit cake served with a hard sauce. Do you see them in the same light and is fruit cake the American version of plum pudding? Judy

Hello Judy - you are right, they are all essentially the same mixture. They developed from an enriched version of the everyday staple of grain porridge. On special days, folk would add what they could - wine, ale, eggs, sugar, fruit etc - this was plum porridge or pottage: this could be put in pastry cases (mince pies),and later when pudding cloths were invented, boiled to make pudding, later still when metal technology allowed shaped metal pans, the same mixture could be baked as 'cake'.