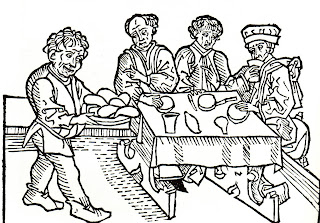 Medieval manorial households were like miniature self-sufficient villages, and keeping the community fed was a massive undertaking. In addition to the extended family members and frequent guests, there were large numbers of household staff (including bakers and brewers) and farm workers, and there was also an obligation to provide hospitality to any travellers (and their servants) passing by.

The job of recording the comings and goings from the household and the management of the accounts fell to the steward, who kept a detailed day to day tally in the Household Book. Some of the surviving household books are a marvellous source of information on daily life on a manorial estate, and one of them is a source for us today.

Thornbury is near Bristol in Gloucestershire, England. In 1508, the holder of the manor, the Duke of Buckingham, began to ‘castellate’ the manor – which then became Thornbury Castle, which you can visit today. The Duke’s household book records the guests and provisions for the Christmas just before this conversion began.


Thornbury, The Feast of the Nativity, Saturday 25th December 1507.

Kitchen spent of the Lord’s store:

In spite of the spelling, it is not difficult to understand the basic meats and so on served at this dinner. This menu is rich in birds – considered fine food partly because, having an aerial life, they were closer to God, and therefore suitable for the fine aristocratic body, especially on a holy day.

It is interesting that ‘flagons’ of ‘frumety’ were purchased. ‘Frumenty’ was a sort of wheat porridge – a staple food for most ordinary folk, but a mere side-dish for the wealthy, and almost obligatory alongside venison. On ‘fish’ (that is, not-meat) days, the well-to-do might have it with porpoise or whale, as in the following recipe, taken from the Form of Cury (the book of the Master Cooks of King Richard II, written about 1390)


Furmente With Porpeys.
Take clene whete and bete it small in a morter and fanne out clene the doust, þenne waisthe it clene and boile it tyl it be tendre and broun. þanne take the secunde mylk of Almaundes & do þerto. boile hem togidur til it be stondyng, and take þe first mylke & alye it up wiþ a penne. take up the porpays out of the Furmente & leshe hem in a dishe with hoot water. & do safroun to þe furmente. and if the porpays be salt. seeþ it by hym self, and serue it forth.
[Form of Cury, c.1390]

He who has not Christmas in his heart will never find it under a tree.
Roy L. Smith
Posted by The Old Foodie at 5:06 AM

I didn't know they had rum back then. Is it actually what we think of as rum, made from sugar-cane, or is it a period name for some other beverage?

Good point, Foose: I missed that. It was certainly not rum as we know it. The first ref to that in the OED is seventeenth century. Now I have to track down the source again to see if it was a transcription error (I got the bill of fare from a secondary source). will let you know what I find.

Update: the OED has another use for the word, first citation is 1567 (but words were always in use a long time before they made the dictionary!)
- "rum bouse, booze, etc., = good liquor, wine."
So perhaps the menu item meant a flagon of the best (of something)

Thanks! I did find out that the name rum (for the beverage we know as rum) could be derived from "saccharum" (sugar) so I thought it might be just possible that the Duke and his guests had something distilled from sugar, imported from the East. But your explanation makes more sense.

Well, after reading this entry, I won't be complaining about the amount of entertaining we'll be doing this holiday season! One question: what are "syntes"? Some quick Googling revealed no bird-related answer. (They are a special-order item, I imagine.)

Hello Anonymous: 'snytes' are 'snites' - just another spelling of the bird-word. no-one cooks them anymore, do they? (at least, I dont)