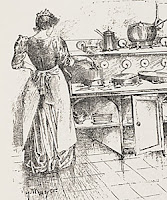 This is our week of ‘kitchen’ words, and today it is the turn of the pantry. There is no need for scholarly research here, an educated guess about the word’s origins will suffice. The word ‘pantry’ is related to the French word pain for bread, and pain was stored in a paneterie.

The Oxford English Dictionary (OED) gives the first reference in English to ‘pantry’ as being in 1325, and defines it as: 'Originally: a room or set of rooms in a large household in which bread and other provisions are kept. Later also: a room used for storing china, silverware, table linen, and glass ...'

The pantry now finds itself in much reduced circumstances, the ‘room or set of rooms’ now more usually a mere glorified cupboard – certainly no longer sufficient to require its own management person. In a large medieval household, the pantry was the domain of the pantler (or panter) – an officer whose role was later absorbed into that of the butler (more on the butler later in the week.)

By the mid-nineteenth century, the housekeeper/cook was in charge of the pantry, and she would be overseen by the Mistress herself. In a well-regulated household, the Mistress would make it her duty to inspect the kitchen each day, as per the following advice given in The Housekeeper’s Guide (1838)


At least twice a week there will be a thorough clearing of the pantry, and in summer this must not be allowed to pass the second day. Habit and experience will teach the housekeeper to provide a sufficiency and no more, according to the style of table required, and humanity will impel her to give to the poor any remaining surplus while it is still palatable and wholesome.

The salt-pan must be daily attended to,- that meat is properly salted, turned daily, and dressed in due time; and if the servant be young and thoughtless, it may be necessary for the mistress daily to look into the bread-pan and cheese-pan also, at least until she has got into the habit thoroughly inwrought in her, of daily wiping those pans with a dry cloth, and scalding them once a week …

This careful attention to food hygiene and to minimising waste was a hallmark of efficient kitchens in the past, and one that perhaps we would do well to reinstate.Safe methods of food preservation (particularly refrigeration) have obviated the need for many of these old kitchen routines, but there is surely another factor operating today too. We are distant from our food sources, and as a result have developed an ‘easy-come, easy-go’ attitude to the provisions that find their way into our pantries and refrigerators – to the extent (we are told,) that one fifth of the food that we purchase is thrown away. Is that not a disgrace?

The following recipe, from the source of the above insights into nineteenth century kitchen management, even recycles the water (now broth or stock) in which salt meat has been boiled.

Ox Heart Stewed.
Cut it up lengthways into thin long pieces. Put them into a stew-pot with a table-spoon of salt, and as much liquor as will cover them. (If the liquor has boiled salt meat, little or no salt must be added). It will throw up a great deal of scum or blood,which clear off as fast as it rises; then add six or eight moderate sized onions, a stick or two or celery cut up, and a dozen of parboiled potatoes; let them stew gently together till all is tender and well incorporated. A quarter of an hour before serving, rub up an ounce of butter with as much flour as it will carry, and a wine-glassful of catsup or walnut pickles.

My curse upon your whunstane hearts, Ye Enbrugh Gentry! The tythe o' what ye waste at cartes Wad stow'd his pantry!
Robert Burns
Posted by The Old Foodie at 5:00 AM

It's amazing what people can throw out - just this week we were given a couple of bags of fruit and veg that my sister-in-law was throwing out because they were starting to go off (she has 4 young children). They weighed more than my wife and I eat in a week! We managed to salvage a mango or two, and the remainder is now great food for our chickens, but not so good for the sister-in-law (or her food budget).

I love this kitchen word series.

David: it is terrible, isnt it? Clearly, our food is too cheap, if we can waste so much. As someone said, when you throw food out, you are not just wasting the food, you are wasting the resources used to grow and transport that food.
EB - I love words, as you probably realise!