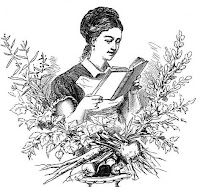 Today’s aspiring food writers have a real challenge in finding a new spin on any food-related topic. It seems that every approach, every angle, every theme has been used before – and multiple times at that. Lucky were the cookbook writers of over a century ago, when the genre was still in barely out of its adolescence, and there were still many avenues unexplored.

One author with a new idea was a certain Elisabeth Luther Cary, who, in 1904 published a book of recipes inspired by the written word. Regular readers will be aware of my fondness for menu and cookery books with a day-by-day theme. Books and My Food is one such book. I have decided that it will be my source for the week – and challenge you to be inspired to remember or create your own recipe ideas from the same short quotations. With a bit of luck, we may find some reading inspiration too.

Before we get to Ms Cary’s literary reference and recipe for January 4th, here are some of her preliminary comments.


“It is impossible to read English novels without realizing how important a part food plays in the mental as in the physical life of the Englishman. The sentimental Anglo-Saxon soul goes out to its roast beef and pudding, to its port and ale, with much the same greeting it gives to its blue violets and Devon cowslips. … And if some of us have inherited from transcendental ancestors a species of contempt toward this gross and material affection for the food that gives us life, shares our nationality, and is the intimate of our homes, we may profitably remember the spirit of domesticity and hospitality which makes such an affection possible. … In making up this collection of recipes suggested by quotations chiefly from our English novelists and poets, our idea has been not to provide Bohemian fare for our readers, or give them unfamiliar and unrelishable diet, but to show what a varied list might be gathered from the works of well-known writers, of dishes most of them equally well-known, and all of them good if properly prepared.”

Unfortunately, Ms Cary does not give the source for the actual recipes, only saying that ‘One little cook-book, undated but apparently more than a century old, has furnished some excellent recipes, not one of which has failed in the trying.’


“Well, that is intelligible,” said Lady Selina Farrell, looking at her neighbor, as she crumbled her dinner-roll. MRS. HUMPHRY WARD (“Marcella”)

DINNER-ROLLS are made as follows: Add to a pint of milk, scalded and cooled, a table-spoonful of melted butter, a teaspoonful of salt, half a cake of compressed yeast dissolved in a very little lukewarm water, and six cups of flour. Mix into a sponge and cover. When light, pull off pieces about the size of a large egg, knead each of these into a smooth ball, then roll between the palms of the hands into a long roll about the size of a finger. Place close together in a biscuit pan and when light bake fifteen minutes in a hot oven.

Today is also the 10th day of Christmas, which featured in a previous blog post HERE.

Stolen waters are sweet, and bread eaten in secret is pleasant.
Proverbs, ix, 17.
Posted by The Old Foodie at 5:00 AM

Thanks so much for the post.. ordered the book... it is charming... although she got ratafia wrong... I can't wait to get lost in the pages.

As always, a great blog!

thanks lostpastremembered - it is good fun, isnt it? Will you blog about it, if you cook from it?