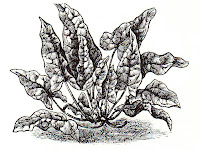 On this day in 1955, luncheon vouchers were introduced to Britain on a new, enlarged scale. The concept of employers providing lunch for their workers was not new in Britain, and many companies did provide their employees with vouchers, but the individual systems were an administrative nightmare for individual firms to manage.

A man called John Hack saw this inefficient system in operation, and realised an opportunity. He set up a company to provide vouchers and manage the system for employers, with clients and caterers paying a fee for the service. The British government backed the system by exempting the vouchers from National Insurance Contributions and tax concessions – and the rest, as they say, is culinary history.

Spinach Cream with Mushrooms.
(The Constance Spry Cookery Book)
Boil two pounds of spinach, drain and press well. Sieve. Have ready half a pint of béchamel sauce made from one ounce each of flour and butter and half a pint of seasoned milk. Add the spinach purée, mixing thoroughly. Stir in two beaten eggs and a tablespoonful of cream, season with salt and pepper and a grating of nutmeg. Turn into a well-buttered ring mould. Stand in a roasting-tin on a doubled piece of paper, surround with boiling water, lay a piece of buttered paper over the top and cook in a moderately slow oven until firm to the touch, 30-40 minutes. Turn out onto a hot dish and fill the centre with a salpicon of mushrooms.


Salpicon of Mushrooms.
Cook a dessertspoonful of finely chopped onion in three-quarters of an ounce of butter for a minute or two, add 6-8 ounces of mushrooms, peeled and quartered, and cook briskly for 4-5 minutes, shaking the pan frequently and adding a squeeze of lemon juice. Draw aside, mix in a dessertspoonful of flour, three-quarters of a gill of vegetable stock, and half a gill of sherry. Bring to the boil, season well and boil rapidly until creamy; use at once.
Be sure that the spinach purée is thick. If it is watery the ring will flop and run when it is turned out. The spinach will sieve more easily if the stalks and any coarse leaves are torn off the central rib before cooking.

Time is an illusion, lunchtime doubly so.
Douglas Adams.
Posted by The Old Foodie at 5:00 AM