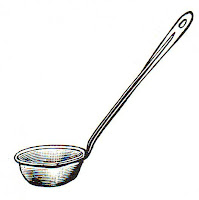 Today’s extract from Books and My Food concerns soup – a very serendipitous topic, as it allows me to mention to you that my book Soup: A Global History (Reaktion Press) is now under production, and should be ready for the shelves at the end of the year.

For January 7th, Elisabeth Luther Cary chose a line from Epistle III, by the English poet and librettist John Gay (1685-1732), and a recipe for a clear soup base or consommé.

The stand-by for soup is a simple consommé which may be multitudinously varied. Cut up two pounds of lean raw meat, beef or veal, and ad a cupful of cold roast beef cut in pieces. Put over the fire with a cracked knuckle of veal, four quarts of cold water, two onions, one carrot, two stalks of celery, six peppercorns, a spoonful of salt, six cloves, and a few herbs. Cook slowly all day. Strain and when cold skim off the fat. Add the white and shell of two eggs. Bring to a boil and boil ten minutes. Strain through a cloth.

The fly that sips treacle is lost in the sweets.
John Gay, The Beggar’s Opera. Act ii. Sc. 2.
Posted by The Old Foodie at 5:48 AM