Here is the bill of fare (and table arrangement) of the Christmas dinner of the Duke of Buckingham in 1808. The expatriate French king Louis XVIII was present, and the bill of fare was prepared by Mr. Simpson, the Duke’s cook. The dinner “Was undoubtedly more substantial than elegant” according to the author of Host and Guest, a book about dinners (Andrew Valentine Kirwan, 1864.) 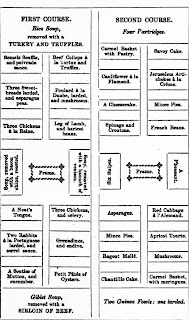 Were I a philosopher, I should write a philosophy of toys, showing that nothing else in life need to be taken seriously, and that Christmas Day in the company of children is one of the few occasions on which men become entirely alive."
Robert Lynd

Lady of the Mote said...

Wishing you and your family a Merry Christmas.

I may not be able to eat for days after seeing this 200 year old menu!

Wishing you a Delicious Christmas!