Summer is well under way here in , in all its hot and humid glory. Not a time of year to use the oven any more than is necessary – although the Christmas turkey usually gets an exemption. Summer in Olde not being as hot as here in the , the recommended menus in old cookery books are still not quite suitable. Nevertheless, I went to Ms. Elizabeth Moxon’s English housewifery, exemplified in above four hundred and fifty receipts, giving directions in most parts of cookery (13th Ed. 1790) for inspiration.

The usual method of dinner service of the time was to put all the dishes on the table at once, according to strict rules of symmetry and hierarchy. This is one of her suggestions for a Dinner in Summer. 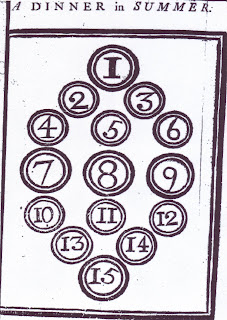 Not exactly a light dinner appropriate for the sub-tropics, but lets see what it entails. The Granade is interesting. To explain a granade requires me to begin with the word. A granade originally referrred to a pomegranate (also granate, granate-apple, or pome-granade) – possibly from pome (meaning apple) and garnet (because the pulpy seeds resemble red gems). The old name hangs on in the syrup called grenadine (which we use in cocktails etc) which is made from pomegranates.
Then in the sixteenth century, gunpowder was being exploited with great enthusiasm by the military. Small round bombs filled with it were invented to be thrown or otherwise propelled into the enemy ranks – and they were called, because of their shape and the ‘seeds’ (of gunpowder) inside them, granades (or grenades). Eventually the soldiers specifically trained in their use became grenadiers. I wonder if present-day Grenadier Guards know that their name comes from an exotic fruit?
This habit of using the language economically led to a round-ish culinary invention also being called a granade. Here is Elizabeth Moxon’s recipe.
A Granade.

Take the caul of a leg of veal, lie it into a round pot; put a layer of the flitch part of bacon at the bottom, then a layer of forc’d meat, and a layer of the leg part of veal cut as for collops, ‘till the pot is filled up, which done, take the part of the caul that lies over the edge of the pot, close it up, tie a paper over, and send it to the oven; when baked, turn out into your dish.
Sauce: A good light-brown gravy, with a few mushrooms, morels or truffles: serve it up hot.
A granade then is a sort of layered meatball – round, like a pomegranate, from the shape of the ‘round pot’, and filled with good things. The mystery is ‘the caul of a leg of veal’. A caul is a the fatty membrane that the intestines hang on, and it is often used to wrap little meatballs. It can also mean the membrane enclosing the baby in the womb. By extension the word is used to refer to other ‘wrapping’ materials such as the net used to wrap rolls of meat. I do not know which is meant in this recipe!
Quotation for the Day …
I love fruit, when it is expensive. Sir Arthur Wing Pinero (1855-1934
Posted by The Old Foodie at 6:09 AM

This book must be the source for a delicious dessert my mum makes, called Elizabeth Moxon's Lemon Posset. It's a light syllabub-ish froth that would be very suitable for summer in Queensland. But then, I think mum's version came from Robert Carrier and might be modified from the real Elizabeth Moxon recipe.