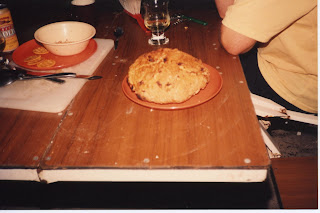 Yesterday's promised post is postponed, for two reasons: after two weeks of redecorating, both my home and my wits are in disarray, and I have no idea what I was going to write about, and secondly because my thoughts on Aussie damper yesterday provoked some flak from my sister and from one of my best friends. Here is the correspondence. You haven't heard the last of this, I can tell you.


From my Little Sister, Val:
Well big sis, what can I say. Aussies DO eat damper! Our variety when camping is to make up the damper dough & mould it around a stick & toast it just like you do with marshmallows. Yummy. Then you dunk your damper kebabs in bush honey (or golden syrup) & eat. A much better variety than in the ashes plus you get to chat companionably around the fire & stare at the flames.
Little Sister

My reply:
Ah! but I bet you have a bit more in your damper than flour and water!
Memo to self: must go on campfire excursion with Little Sister.
Big Sister.

From my friend Marj:
Speaking as one who has savoured the delights of sitting around a campfire at the back of beyond (and other places) with freshly cooked damper from the camp oven among other delicacies, I can tell you, you haven't lived (yet)!
Marj

My reply:
Got a similar email from my sister! I bet your damper was not simply flour and water - bettcha it had some milk or butter or currants. AND it was cooked in a camp oven not directly on the ashes. … [yours] is a "second generation" or "scone-type" damper (Damper for Wusses) Flour and water, that’s what the lady said. Make it more runny and it is glue, make it less runny and it is brick.

Marj’s reply (accompanied by the above photo, taken beside the in ):
‘This is one damper that I admit to adding sultanas to - we enjoyed it while camped beside the Jardine River on Cape York a few years ago.There was none left over to throw to the crocs in the Jardine.
I could not find the photo of another damper that rose beautifully, only to fuse to the lid of the camp oven. I won't bore you with 's damper story - as a past Queen's Scout he accompanied our boys on a Scout Camp and showed his considerable damper skills to all the eager faces. Unfortunately that damper formed a permanent attachment to the camp oven and had to be removed with an angle grinder! He wasn't asked to demonstrate a second time.
Be a devil - try a damper!"
Love
M
PS the brush in the background is for brushing of the ashes/coals BEFORE the lid is removed! The wine and XXXX act as suitable lubricant.

[For those of you over the various Ponds – the XXXX refers to ‘Fourex’, a well-known beer brand.]

To reinforce the ‘real’ recipe, here is a more detailed description of the method from the Progressive! An Account of the Colony, its Soil, Climate, Productions and Capabilities. J.C. White, 1870.

Damper, or Bush Bread.
Cut a piece of bark off a gum tree for a kneading trough about 2 feet square.
Put on it 2 or 3 pannikins of flour – one pannikin is about 1 ob. – add a small tsp of salt to every 1 lb. of flour, gradually pour water into the centre and work it till it becomes a thick paste. The secret of a good damper depends on the thorough working of this paste. Shape it into a round flat cake about 2 inches thick – it will be ready for cooking.
Your fire should be prepared some time before so that you may have a large quantity of ashes. Rake out the ashes with a forked stick, level the ashes on the ground, which should be about 2 or 3 inches thick, rub your cake over with a little loose flour to prevent it sticking, and carefully place it on the ashes. Cover it all over with hot ashes about 2 or 3 inches deep. It will be baked in 30 or 40 minutes, according to size.
You can tell when it is done by uncovering it and striking with your fingernails: if not done the sound is dull and dead; or stick your knife in,and if it draws out clean it is done.
Knock off all the ashes with a green bough, stand it up to cool, and it is fit for use.

Please, Little Sister and Marj, send us your methods for comparison.

Don't worry about the world coming to an end today. It is already tomorrow in . Charles M. Schulz

I've had the damper on a stick with golden syrup.

I am sentimental about damper because we used to have it as part of BBQs as a child - it was a big lump of flour and water (or it might have been milk, I can't quite remember) which came out of the ashes with a charcoal crust but tasted wonderful and fluffy inside when you ripped it apart. Not at all like most of the damper recipes you see on the internet.